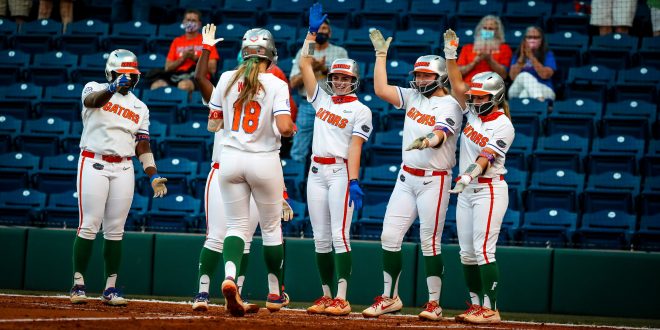 Emily Wilkie meets her teammates at home after blasting a grand slam in the first inning against North Dakota on March 17, 2021. (Photo Credit: @GatorsSB / Twitter)

Emily Wilkie’s first plate appearance proved to be the difference maker on Wednesday night. The freshman faced a full-count, bases-loaded, two-out situation in the first inning. Then, she launched a fastball from North Dakota’s Jannay Jones over the scoreboard in left-center field. The grand slam homer provided a lead the Gators would not relinquish in their 7-1 victory over the North Dakota Fighting Hawks Wednesday night in Gainesville.

Due to 4-0 loss in an exhibition against Team USA on Tuesday night, the Gators entered Wednesday’s game hungry for runs. That first inning homer helped out the appetite.

A two-out error by North Dakota was huge in the inning because an out there would have retired the side without scoring damage.  The grand slam was Wilkie’s second home run of the year, and it accounts for half of her RBIs on the season.

After that, the Gators managed to tack on a few more runs in the second and fourth innings.

The Gator lead over the Fighting Hawks ballooned to five when Hannah Adams rocketed a ground ball at North Dakota’s first baseman. A tough play to make for any fielder, the ball caromed off Madison Pederson’s glove into right field as Cheyenne Lindsey raced home. Then in the fourth inning, Kendyl Lindaman’s single and Charla Echols’s sacrifice fly scored two more for the Gators.

The Gators would have chances to run-rule North Dakota, but they could not plate two more runs after the fourth.

Coach Tim Walton’s club only managed six hits; the difference offensively were the walks allowed by North Dakota.  Their pitchers walked six Gators and four of the hitters walked scored in the game. Emily Wilkie and Kendyl Lindaman will take the headlines in this one, combining for three hits and five RBIs. However, Florida’s pitching allowed for practically stress-free hitting.

Of the four pitchers to receive significant action this year, Rylee Trlicek has been the odd-one out. Natalie Lugo, Elizabeth Hightower and Katie Chronister have dominated this season in the circle. Therefore, it is only more encouraging for Tim Walton that he has a relatively underused player like Trlicek occupying his bullpen.

The sophomore picked up her first win of the season in her four-inning outing on Wednesday. Trlicek gave up four hits and one run, but the run was unearned after a Kendyl Lindaman error at first. The left-hander also struck out two in her performance.

Walton’s decision to relieve Trlicek of her duties brought out those players that have dominated. Lugo, Hightower and Chronister each pitched one inning and each struck out two of the batters they faced. Chronister gave up one hit, but that was it for the Fighting Hawks.

By the end of the game, North Dakota mustered only five hits to go along with the unearned run.

Playing back-to-back games against non-SEC opponents should get Florida back in the right frame of mind. The same can be said about their scoring. Seven runs is no easy task in college softball, regardless of opponent.

Florida’s next task is their first true road series since the season-opening series against USF.  The Gators travel to Starkville for a three-game series against Mississippi State beginning Friday night.

Originally from Seminole in the Tampa Bay area, Kyle is a contributor for ESPN Gainesville as well as local NPR and PBS affiliate WUFT. Kyle wants to get into sports with a lofty dream of being a sports broadcaster. He was raised playing soccer and baseball while watching hockey and football, so the knowledge about various sports is fairly extensive.
@KyleFanslerUF
Previous Miami Heat Fall Short Against Grizzlies
Next Gators Baseball Opens up SEC Play Against Texas A&M Aggies