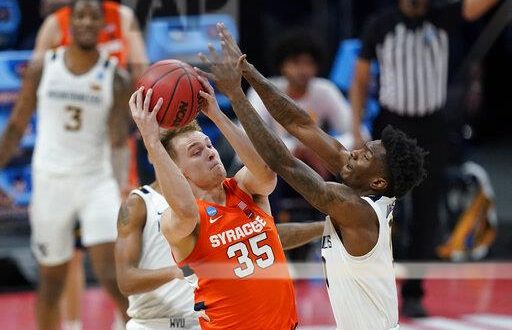 “It’s the best thing I’ve ever done, but it’s hardest thing because you can’t think about — he’s my son,” Boeheim said.

No. 11 seed Syracuse wouldn’t still be in the tournament if it wasn’t for the contributions from junior Buddy Boeheim. The 6-foot-6 guard scored 30 points in the Orange’s first round win over No. 6 seed San Diego State last Friday. Two days later, Buddy put on another shooting performance, scoring 25 points against No. 3 seed West Virginia in the Round of 32.

“He’s the hardest worker I’ve ever been around, and I’ve had some really hard workers,” Boeheim said.

During the past two games, Boeheim, the Orange’s leading scorer this season, made 13 three-pointers on 23 total attempts. Having those dominant performances, Boeheim will soon coach in his 20th career Sweet Sixteen; third since 2016.

“I’m so proud that he made himself into this, because he just wanted it,” Boeheim said.

Syracuse is scheduled to play No. 2 seed Houston on Saturday night at Hinkle Fieldhouse in Indianapolis. The winner of that matchup will then face No. 8 Loyola Chicago or No. 12 seed Oregon State in the Elite Eight.

If Syracuse loses against Houston, fans should expect Boeheim, 76, back on the sideline again next year. He has no plans of retiring anytime soon and he want his son to return for his senior season.