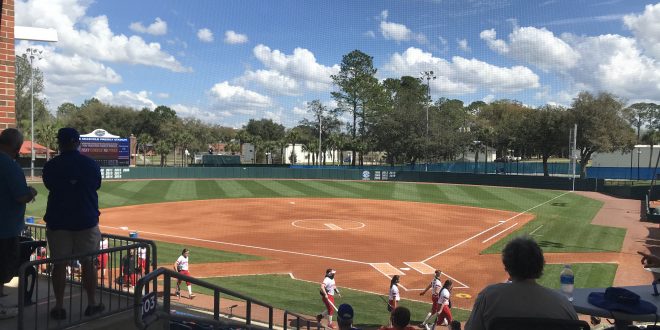 The Gators return to Katie Seashole Pressly Stadium for the first time since they hosted Kentucky. (photo/Parker Fluke)

This time last year, Tim Walton and the Gators’ softball season had been canceled for over two weeks. With the outbreak of COVID-19, the Florida Gators played their last game of 2020 against FSU in a 5-2 win. This time around, the Gators sit at 21-3 and boast one of the best pitching staffs and lineups in the SEC.

With a team ERA of 1.31, the Gators rank third in the SEC, and they hit at a .302 clip. But it’ll all be put to the test with the No. 13 LSU Tigers coming into town this weekend. The Tigers ride an 18-8 record, but seven of their eight losses came to top 25 teams.

Back to the SEC

The Gators have jumped out to a 5-1 start in the SEC thanks to a dominant series sweep over Mississippi State. Florida outscored the Bulldogs 19-0 over the weekend in Starkville on dominant pitching and hitting performances. The No. 22 UCF Knights slowed Florida’s roll on Wednesday, though, riding a three-run seventh inning to walk off a comeback victory over the fifth-best team in the country.

Gators ace Elizabeth Hightower took her first loss of the season after giving up the walk-off homer. Hightower earned SEC Pitcher of the Week and still leads Florida in ERA and strikeouts despite the loss.

The road doesn’t get much easier for the Gators in a matchup with one of the best teams in the SEC this weekend. But they’ve proven to be capable of silencing excellent batters and slugging against great pitchers. Mississippi State’s Mia Davidson entered the series against UF with a .365 average and 27 hits; she only managed one hit the entire weekend and struck out three times.

The last time the Tigers took the field, they won two of three against Texas A&M in Baton Rouge. LSU had scheduled a game against South Alabama on Wednesday, but the two teams canceled the game due to inclement weather.

The Tigers aren’t particularly setting the world on the fire at the plate as a team. Their team average of .268 ranks last in the SEC, and they rank towards the bottom of the league in OBP, Slugging percentage and several other hitting metrics. The story of what success they do have at the plate starts with Aliyah Andrews. The senior outfielder leads the team with a .369 average, 31 hits and 16 stolen bases. In fact, her speed on the base paths and in center field has garnered national attention.

Seriously, Air Aliyah is not here for this nonsense #MakeItCount #SCTop10 pic.twitter.com/YrRNRENBxL

Her sprawling catch made it on SportsCenter’s Top 10 countdown. Andrews ranks second in the SEC in stolen bases, so look for her to make an impact with her speed this weekend; either in the field or on the paths.

The Tigers’ head coach, Beth Torina, has the chance to achieve a major milestone this weekend. In her 10th season at the helm, she sports a 399-166 record, so she’ll be looking to earn her 400th win in the purple and gold this weekend.

First pitch for Friday’s game is set for 6. The two will also play on Saturday at 5 and Sunday at 11. Saturday’s game will air on ESPN, while Friday and Sunday’s games will be live on SEC Network+.

I'm a third-year student at the University of Florida passionate about storytelling and sportswriting. My goal is to work in communications for a professional sports team after I graduate.
Previous NCAA Women’s Tournament Sweet Sixteen Preview
Next Sweet Sixteen: Michigan vs. Florida State Preview