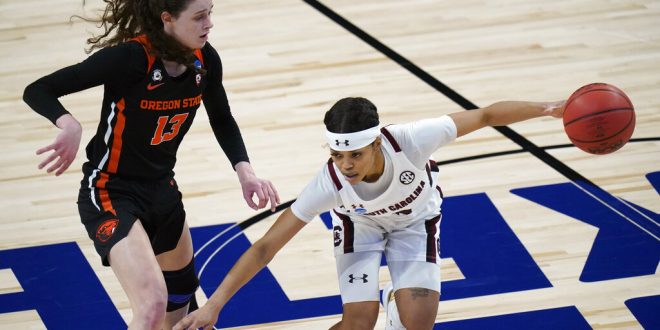 South Carolina guard Destanni Henderson drives past Oregon State guard Sasha Goforth (13) during the second half of a college basketball game in the second round of the women's NCAA tournament at the Alamodome in San Antonio, Tuesday, March 23, 2021. (AP Photo/Eric Gay)

After a wild opening weekend filled with close games and upsets, the NCAA Women’s Basketball Tournament rolls into the Sweet Sixteen this weekend.

Coming into this game, the obvious storyline is freshman Caitlin Clark leading the Iowa Hawkeyes. To say she’s been electrifying in this tournament would be an understatement. The Hawkeyes have outscored their first two opponents by an average of 14.5 points in the opening weekend. Clark is also the nations leading scorer.

Despite her strong play, the freshman will have her hands full with one of the nation’s top teams. In addition, UCONN gives up the second least points per game at 50.7. They held their most recent opponent, Syracuse, to 47 in the Round of 32. The Huskies are led by a freshman themselves as Paige Bueckers as she leads the team with 19.9 points per game. This is the opening game of the Sweet Sixteen which tips Saturday at 1 o’clock.

Baylor has steamrolled their opponents to get to this point. They won their opening game and Round of 32 matchup by 49 points and 42 points, respectively. The key to this game for the Lady Bears will be dominating the paint like they’ve done all season. Junior NaLyssa Smith has been a force to reckon with all season long leading the team with 18 points per game and 261 total rebounds.

For Michigan, they upset the third-seeded Tennessee Volunteers and did so with ease. The Wolverines took advantage of a Tennessee team that looked sluggish all game long as Michigan would get into the bonus early on in both halves. Leigha Brown led Michigan with 23 points in the win and was a perfect 11-for-11 from the free-throw line. She and fellow junior Naz Hillmon have led the Wolverines to the point in the season with game time set for Saturday at 3.

The Wolfpack were put on upset alert in their Round of 32 game against the USF. The Bulls kept had the lead for much of the first half but NC State quickly showed out to be the team they were all season. They outscored USF 44-31 in the second half as five players reached double figures.

This game should be a tough, gritty matchup that features two teams that focus on defense first and take care of the ball. With two coaches that have steadily built their programs to the national stage, this matchup has a chance to be the best of the bunch.

This matchup features two teams that dealt with some chaos in their second game. Aari McDonald was sensational in Arizona’s win against BYU recording a double-double with 17 points and 11 rebounds. She also made some big plays down the stretch to carry Arizona to the win.

On the other side is the Jordan Nixon-led Texas A&M Aggies. She was beyond clutch hitting a game-tying bucket and winning the game at the buzzer against Iowa State. The sophomore will look to continue her strong play this tournament Saturday night at 8 o’clock.

The rest of the games

Saturday is a busy day that will likely offer even more chaos and madness; but that’s what March is for, right? It doesn’t stop there with the Sweet Sixteen continuing Sunday with Georgia Tech-South Carolina, Missouri State-Stanford, Oregon-Louisville and Texas-Maryland. Check out the full bracket here.