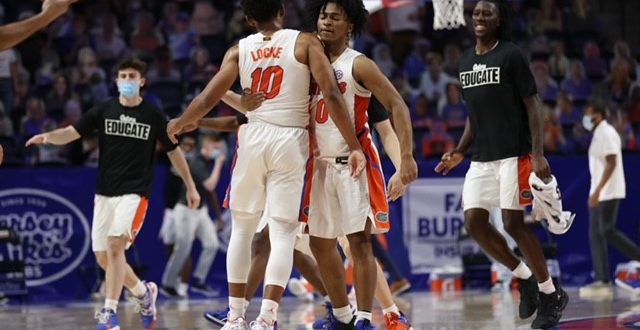 Florida Gators guards Noah Locke and Ques Glover took to Twitter Thursday night to announce they would be entering the transfer portal. This comes after point guard Tre Mann made the announcement that he will be entering the 2021 NBA Draft and assistant coach Jordan Mincy was named head coach at Jacksonville University.

In his announcement, Locke thanked his coaches, teammates and Gator Nation for “3 years full of obstacles and experiences.” There’s no doubt that Locke’s departure will leave a hole in the backcourt for the Gators. Locke averaged 10.6 points and shot 40% from the 3-point line. He played in all 25 games this season, starting in 24 of them.

However, Locke finished the 2020-2021 season as the team’s fifth-leading scorer. He fell behind Tre Mann, Keyontae Johnson, Colin Castleton and Tyree Appleby.

Locke is an elite shooter who holds multiple Florida records. He set the record for most consecutive games making multiple 3-points (15) and most games with five or more 3-pointers. Locke holds the freshman record for 3-pointers, making 81 in the 2018-2019 season. Locke is just 77 points shy from reaching the 1,000 career points milestone.

Glover averaged 2.5 points during the 2020-2021 season, dropping from averaging 4.4 points his freshman season. He appeared in 51 total games for the Gators, but never as a starter. Glover didn’t play in the SEC or NCAA Tournaments. He scored 49 points in 20 games this season.

Glover’s best game of the season was against Georgia on February 20. He recorded a season-high 11 points and 18 minutes played.

Tre Mann’s announcement of entering the 2021 NBA Draft was met with praise and support. The Florida Gators Men’s Basketball account tweeted a highlight video of Mann with the caption, “Shout out to our guy @tre2mann3! Go chase your dreams, fam!” No statements from within the men’s basketball program have been made about Locke and Glover.

It is believed Tyree Appleby will return next season for his senior year. The Gators signed Kowacie Reeves Jr. in the 2021 recruiting class. The 6’6″ shooting guard is a contender for the newly-vacant starting position at guard. Keyontae Johnson’s future is uncertain. What is certain is that Mike White has a lot of rebuilding to do during the offseason.

“As is the case every spring throughout power-conference basketball there will be movement and the transfer portal will become as prominent as ever,” White said Thursday. “We look forward to getting to the point where we find out who’s on our roster and getting back to work, finishing our schedule, and hopefully more of a normal offseason.”