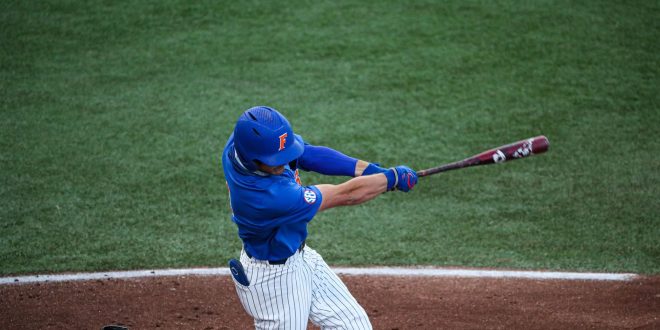 Florida baseball fell captive to the Gamecocks and the wind on Sunday afternoon in an 8-5 loss in Columbia, South Carolina. In their first conference road series of the year, the Gators were not able to secure a win in any of the three games. South Carolina owned Florida over the series and notched their first sweep over the Gators since 2006. This is Florida’s first series loss to South Carolina since 2008. This is only the seventh series in a total of 92 series that UF has fallen three games straight.

Drought at the Plate

Florida came out flat at the plate for most of the game. In total, the Gator hitters accumulated 14 strikeouts at the plate with only six hits. Freshman Sterlin Thompson struck first with a solo home-run over the right-field wall with slight help from the 17 MPH winds carrying through the ballpark. That would be Thompson’s only hit of the game.

South Carolina followed in similar fashion with three back-to-back-to-back home runs off the hands of starting left-handed pitcher Hunter Barco in the bottom of the second. Left fielder Wes Clarke ignited the home run fest leading off in the bottom part of the frame. Currently, Clarke leads the country in home-runs. With the momentum and the lead, the Gamecocks kept the shots coming with a solo shot from centerfielder Brady Allen in the bottom of the third.

Cleanup man and third baseman Kirby McMullen took one out of the park over the centerfield wall to bring the Gators within in one run, 4-3. McMullen’s home run scored catcher Nathan Hickey who had reached base on an error.

Ultimately, the Gators could not get going at the plate. This draught comes at an inopportune time after a convincing series over Texas A&M. Typically, finding rhythm at the plate has been a strong suit so far this season for Florida.

After two rough outings for Florid’s starting pitchers on Friday and Saturday, Barco fell into a similar scenario but was able to pitch through five innings. This was the longest pitching stint by any Florida pitcher all series. The lefty found his groove after a bumpy few first innings filled with home runs due to leaving his fastball over the plate.

Right-hander Ben Specht came in for relief for Barco to start off the bottom of sixth. Recently coming back from injury, the Gamecocks took advantage of the new pitcher and added four more runs to the board. Shortstop George Callil doubled off the wall to score two runs and Allen followed up with his second home-run of the game to bring the final two runs for USC to the plate. After six innings, South Carolina led 8-3. Brandon Sproat came out of the bullpen for the Gators in the 7th and escaped with no damage and freshman Timmy Manning closed the eighth and ninth inning cleanly.

Florida was able to somewhat rally in the bottom of the 8th with a two-out double from Hickey to get within three. The Gators were not able to add on any more runs in the ninth, despite a two-out single from designated hitter Kris Armstrong.

The Gators will return to Florida Ballpark on Tuesday as they look to shake off this past series against Mercer. Later in the week, they will welcome in No. 4 Ole Mis for a home weekend series.