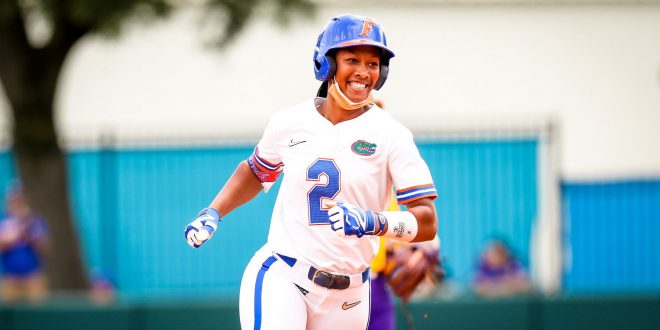 Cheyenne Lindsey had a quiet first two games against LSU by her standards. Just two singles in her five at-bats is good, but Lindsey has been due for an offensive explosion. Leave it to a career day on Sunday to show her talents.

A bases-clearing three-run double and a two-run home run propelled Lindsey to five RBIs. Then with the cushion established, starting pitcher Elizabeth Hightower went to work. In the end, the Florida Gators Softball team walked out winners on Sunday by a score of 9-3. The win gave the No. 5 Gators a series sweep over No. 13 LSU.

Lindsey leads the line on offense

On Saturday, the Gators used two two-run homers in the first inning to run away from LSU early on. The first inning proved fatal again on Sunday afternoon.

On the first pitch after her first-inning strikeout, Lindsey shot a ball off the wall in left-center field. Jaimie Hoover, Emily Wilkie and Julia Cottrill scored, and the Gators ballooned their run total to seven.

Lindsey expanded the offensive output to nine in the bottom of the fifth. On the first pitch of her third at-bat, Lindsey sent a fly ball to straightaway center field. With the wind blowing at her back, Lindsey’s fly carried over centerfielder Aliyah Andrews, and the Gators led the game 9-3.

Elizabeth Hightower earned SEC Pitcher of the Week following an illustrious weekend against Mississippi State. Despite a hiccup in form against UCF midweek, she returned to her best against LSU.

On Friday against LSU, Hightower’s complete-game shutout was her third straight shutout against SEC competition.

It took LSU four innings on Sunday to finally put a runner across the plate. A two-run double by Georgia Clark in the fourth and a Shelbi Sunseri groundout forced home the Tigers’ third an inning later.

It always helps when your offense puts up seven runs through three innings to give a pitcher some confidence. However, Elizabeth Hightower’s recent performances reciprocate that confidence.

Hightower was perfect through three innings; nine Tigers faced, nine Tigers downed. Even if her strikeout numbers do not wow anybody, she yielded only five hits in the complete-game outing. None of these hits were booming off the bat, and the two run-scoring hits narrowly squeezed by Charla Echols’s glove at third base.

Her two wins this weekend pushed Elizabeth Hightower’s record to 12-1.

Florida’s offense is great, but it does lean slightly top-heavy.. Hannah Adams, Kendyl Lindaman, Charla Echols and Cheyenne Lindsey are all batting around .400. Beneath that, there are questions regarding hitting consistency. This series against LSU, and especially Sunday’s victory, showed offensive depth.

On Sunday, Baylee Goddard and Sarah Longley combined for three RBIs, Julia Cottrill and Emily Wilkie each had two hits and Katie Kistler picked up her first career hit as a Gator.

Jaimie Hoover and Julia Cottrill picked up home runs this weekend that could get them going. Hoover and Cottrill are especially important batters as they follow the likes of Lindsey, Adams, Lindaman and Echols in the batting order.

In the circle, it was business as usual. Katie Chronister’s sixth win on the season supplemented Elizabeth Hightower’s two victories.

Florida is 8-1 in the SEC this season, having swept their last two series against Mississippi State and now LSU. Overall, Tim Walton’s squad has a record of 24-3.

Next up is a road game against Jacksonville University on Wednesday. The Gators and Dolphins met earlier this season, with the Gators winning their earlier meeting this season on a Hannah Adams walk-off blast in the seventh inning.

Originally from Seminole in the Tampa Bay area, Kyle is a contributor for ESPN Gainesville as well as local NPR and PBS affiliate WUFT. Kyle wants to get into sports with a lofty dream of being a sports broadcaster. He was raised playing soccer and baseball while watching hockey and football, so the knowledge about various sports is fairly extensive.
@KyleFanslerUF
Previous Gators Swept by Gamecocks
Next COVID Aftershocks Continue as Transfer Portal Swells