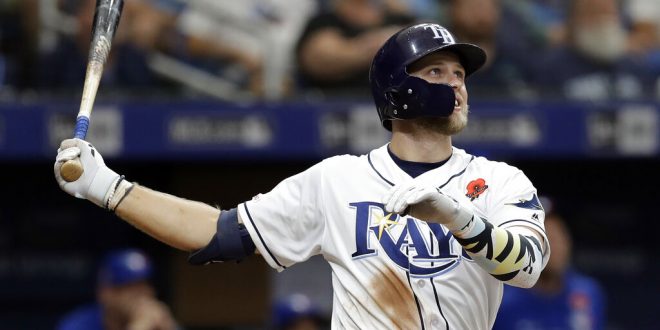 The Tampa Bay Rays are days away from starting their 2021 season.

As the team bids farewell to Blake Snell and Charlie Morton, they welcome back Chris Archer and the 162-game season. The Rays enter as the reigning American League champions–and a few question marks.

With the Yankees and Blue Jays improving, the question remains if the Rays can make another run at the pennant. The annoying honest answer is we’ll have to find out. However, certain spring training performances and key names show the Rays will at least remain competitive and make a run for their third-straight postseason appearance.

Tyler Glasnow is the ace of the staff with Blake Snell in San Diego. He’s the Opening Day starter, and not more needs to be said than that for him. Moving on.

Yarbrough will start Game 2 for #Rays vs. #Marlins

In a few ways, Yarbs took a step forward in 2020. His ERA dropped 4.13 in 2019 to 3.56 in 2020. Much of this can be attributed to a drop in home runs allowed. However, he took a step back in other ways. Walks were up. His opponents’ batting average jumped up, and he led the league in hit by pitches. Just a lot more baserunners to give him a hard time. If Yarbrough can get those numbers back down while still keeping the home runs down, he’s poised for a sub-3.00 ERA season–and dare we say in the modern game, he can be a 20-game winner as well.

Rounding out the rest of the rotation is the old ace in Chris Archer and (likely) veterans Michael Wacha and Rich Hill. Josh Fleming, Shane McClanahan or Luis Patino–who will all start the season in the minors–could steal spots down the road depending on how everyone performs. Brenden McKay hasn’t pitched in spring training, but like Fleming and Patino, has started major league games. He could return at some point this season. The point is the Rays, at last, have enough arms for a rotation. That being said, knowing Kevin Cash, this does not mean there will be five starters–though it could be better for the health of the bullpen if they did.

Speaking of the Bullpen

The Rays appear to be trying a different route with the bullpen this year. They still have traditional, one-inning relievers in Diego Castillo, Peter Fairbanks, Ryan Thompson and Chaz Roe. But they have more long relievers this year.

The Rays signed former Astro Collin McHugh to the roster. And as stated before, the have other options in the minors–Fleming, Patino, etc. These guys can and will end up in the bullpen this year. All of them being stretched out this spring to pitch multiple innings. With key relievers on the IL and the three-batter minimum entering its first 162-game season, the Rays know they will need guys capable of getting six or seven outs.

It would also be nice for staff if there are a few nights where the team only needs two or three pitchers to get through a game, a la Joe Maddon. Forget complete games though, there have been two since Kevin Cash took command with the last one being in May 2016 (the other was Chris Archer in August 2015).

Now, For the Guys That Play Every Day–Position Players

There are very few locked positions on the field for the Rays. Kevin Kiermaier is in center field, Brandon Lowe and Willy Adames are the middle infield and that’s it. If Ji-Man Choi was healthy, first base would also be a lock. This doesn’t mean they will play that position 162 times or potentially play a different position (Lowe in the outfield will happen a few times). These positions are simply more stable and these players won’t move around as much as Joey Wendle and Mike Brosseau–whom according to the depth chart can play nearly everything.

Every other position consists of moving parts. To at least start the season, Mike Zunino and Francisco Mejia will rotate catching duties–you may see some of Kevan Smith.

Austin Meadows, Randy Arozarena and Manuel Margot will take the outfield corners. Meadows and Arozarena will likely see a decent amount of time at the DH spot as well, even though only Meadows is listed as a DH on the depth chart. It’s just semantics with officially listed positions.

Until Choi and his epic splits return, potential players who can take that spot are Yandy Diaz (who has played first before), Yoshi Tsutsugo and Mike Brosseau.

Along with Joey Wendle, you can see all three of those guys at third base as well. The hot corner has been the biggest question mark since you-know-who was shipped off to San Francisco in December 2017. Perhaps Wander Franco can pull a Manny Machado/Alex Rodriguez and change that. But for now, it’s the most fluid position in baseball.

Harrison is a sports coordinator at ESPN 98.1 FM/850 AM WRUF. He served as a beat writer for Florida Gators football for the 2019 and 2020 seasons. He also contributes to WRUF's Gainesville Sports Center segments and makes appearances on the Clash on Harp on Sports. Harrison has been a content writer for WRUF since January 2019 as well.
@HarrisonSmaj
Previous ‘Bama Falls to UCLA in Sweet 16 Thriller
Next South Carolina Only SEC Team to Advance to Elite 8 in Women’s NCAA Tournament