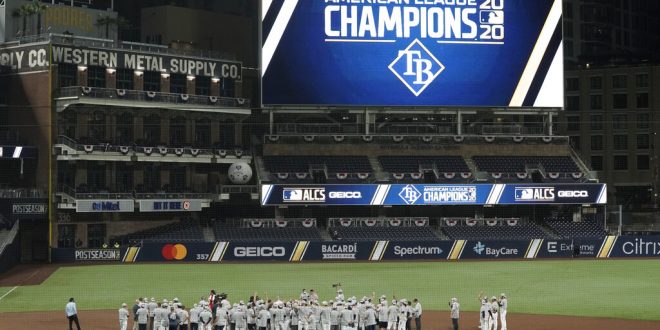 In a wild 2020 MLB season that saw a shortened 60 game season, an expanded playoff format and a condensed playoff schedule, the World Series is here. After two intense Game 7s, we see the Los Angeles Dodgers and Tampa Bay Rays World Series bound.

Rays win in Game 7 over Astros

The Rays were up three games to zero in the ALCS over the Astros. The Astros then won three straight to force a Game 7. The Rays came up with the win 4-2.

Following the Game 7 win, Rays manager Kevin Cash spoke highly of star pitcher Charlie Morton. Cash said, “For a group that doesn’t have a wealth of experience in these roles, Charlie does. He’s been there, done that. It lined up really well for us.”

In Game 7, Charlie Morton pitched for the win over his former team. Morton was a part of the 2017 Houston Astros team that won the World Series and now just beat them to advance to the 2020 World Series.

The Rays have not lost a game in the postseason with Morton starting. They will be sure to rely on him for wins against the Dodgers. Cash said the team is “lucky to have Charlie Morton.”

The Rays pitching team has been very good when it matters most this postseason. The Rays have given up the most hits this postseason, but are tied with the Dodgers for the best team ERA for teams with more than 25 innings pitched with an ERA of 3.36. Charlie Morton has been especially great posting an ERA of 0.57 in the playoffs.

A focus for the Rays will most likely be improving their hitting. Through this postseason, they have posted a team batting average of .209. The 25-year-old left fielder Randy Arozarena, however, has been a bright spot in the Rays hitting. Arozarena has been hitting 0.382 thus far – 0.92 better than the next best on the team.

The Rays will have to be quick in getting outs, however, because the Dodgers plan on keeping easy outs to a minimum. Star Dodgers outfielder Mookie Betts said following yesterday’s win over the Braves, “We’ve done that all year. Grinding through at-bats, not giving, making easy outs. We had 27, I think we made them all tough. That’s how you win games.” The Dodgers won 4-3 over the Braves to advance to the World Series.

Jensen Young is a journalism student at the University of Florida. He works as a sports writer for WRUF.com and is the voice of trendings on Wednesday mornings on the WRUF radio station.
@Jensen_Young9
Previous Gators soccer Falls to Vanderbilt in Double-Overtime
Next Dodgers Beat the Braves to Advance to the World Series