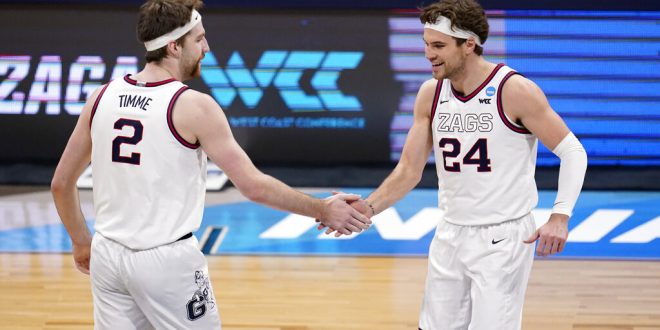 Gonzaga forward Drew Timme (2) and Corey Kispert (24) react to a play against Creighton in the first half of a Sweet 16 game in the NCAA men's college basketball tournament at Hinkle Fieldhouse in Indianapolis, Sunday, March 28, 2021. (AP Photo/Michael Conroy)

USC and Gonzaga Fight for a Spot in the Final Four

The No. 1 seed Gonzaga Bulldogs (29-0) look to extend their undefeated season to 30-straight games in an Elite Eight matchup against against the No. 6 seed University of Southern California (USC) Trojans (25-7). The two teams play Tuesday in Lucas Oil Stadium Stadium at 7:15 p.m. with a chance to advance to the Final Four. The game will air on TBS with broadcaster Kevin Harlan calling the game.

Gonzaga easily beat Creighton by 18 points in the Sweet Sixteen to advance to the Elite Eight. In the win, former Florida guard Andrew Nembhard had one of his best performances of the season scoring a season high 17 points and eight assists.

Similarly, USC handled business against conference-foe Oregon with a 14-point win. Guards Isaiah White and and Tahj Eaddy combined for 42 points in the to lift the Trojans to the Elite Eight.

Despite their close proximity, the two West Coast teams have only played each other twice before. The Trojans won both matchups in 1992 and 1993.

The winner of the game will face either Michigan or UCLA in the Final Four.

In addition to extending their win streak to 30, the Bulldogs also hope move their NCAA-record 26-game double-digit win streak to 27. The scoring combination of Jalen Suggs, Corey Kispert and Drew Timme give the ‘Zags a good shot.

The Bulldogs’ star trio combine for almost 50 of Gonzaga’s 89 points per game during the tournament. Either Timme or Kispert has been the leading scorer for the team in every game this tournament. Timme has averaged 26 points in the Bulldogs last two matchups, which leads the team.

With a win, the Bulldogs would be in only their second Final Four in program history. It would also be the second under head coach Mark Few when the team made it to the last four in 2017 where they lost to North Carolina in the National Championship.

The Trojans have exceeded expectations making it this far, as they’re a six seed, and the second highest remaining seed left in the dance. Despite this, they have may have the best player left in the tournament in Evan Mobley.

Mobley’s 7′ frame has the potential to give the 6’10” Drew Timme trouble in the matchup. Size plays in the Trojan’s favor again as 6’10” Isaiah Mobley, Evan’s brother, matches up on one of the ‘Zags other stars Kispert, who is only 6’7″.

If USC pulled off the upset, they would become the first six seed to make the Final Four since Michigan and the “Fab Five” did so in 1992.  It would be USC’s third Final Four appearance in program history.