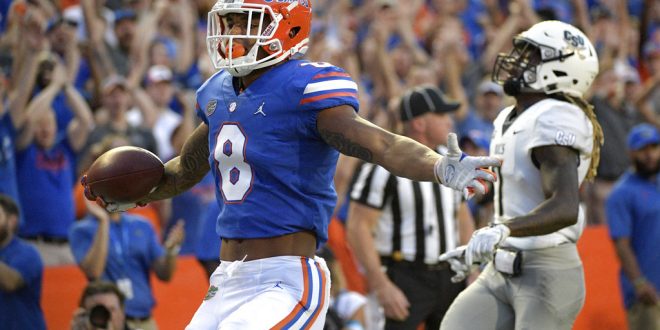 Football fans across the country are paying all attention to the upcoming 2021 NFL Draft in April. Eligible draft prospects are bringing their best to heir program-held Pro Days after the 2021 NFL Combine was cancelled due to the COVID-19 pandemic. As scouts are currently relying on these program-held Pro Days, one player who is looking to make waves is Florida Football wide receiver Trevon Grimes.

Trevon Grimes on opportunity to play

Completing his Florida career with 1444 yards, 97 receptions and 14 touchdowns, Grimes is making a good lead into the NFL. As one of the many weapons on the Gators’ passing attack, he is looking to capitalize on his success at the next level.

Whether it comes down to blocking game or making big catches, Grimes is focused on improving these aspects of his game. In his 2020 season at Florida, Grimes posted 593 all purpose yards, 38 receptions and nine touchdowns. He specialized in speed down the sidelines, which helped push him while preparing for Florida footballs’ Pro Day.

When in a receiving unit that includes tight end Kyle Pitts, it is obvious where most attention will go. On the Gators Pro Day, the projected high-draft pick Pitts put on quite the show. He posted a clean 4.44 40-yard-dash, 10-foot 9-inch broad jump and 33.5 inch vertical jump.

But with all eyes on arguably one of the best tight ends in the country, Grimes is focusing on his increased level of opportunity.

In a year without the NFL Combine, days like the program-held Pro Days are the most important. But Grimes is not deterred by the new process, instead sharing how he was excited to get back in the same building with his former teammates one last time.

“We came out and competed, everybody did a fantastic job. We were all just excited to get out here and get back. Throw with the quarterback that got me through my college career, so it was a pretty good experience. I’ll hold this, I’ll cherish this experience for the rest of my life,” he said.

Grimes has not received as much attention as his Gators teammates. But he had some impressive results pouring in from Pro Day. Grimes posted 4.49 40-yard-dash, 9 foot 10 inch broad jump and 35-inch vertical jump.

He has been talking with a handful of NFL teams, naming interviews with the New York Giants and Pittsburgh Steelers. He is staying focused as he has enough tools to develop into a dependable, deep threat weapon.

Regardless of when Grimes is drafted and where he ends up, he wants to bring an explosive energy with him. He is looking to expand upon the historic Florida offense he is leaving.

With the right offense, Grimes should be a dangerous weapon in the NFL.

Tori Edwards is a fourth-year Telecommunications student specializing in News with an outside concentration in Sport Management at the University of Florida. Tori works as an author and reporter for WRUF.com and is the voice of trendings on Wednesday mornings on ESPN 98.1 FM - 850 AM WRUF. You can reach Tori at victoriaedwards@ufl.edu.
@ToriEdwardsNews
Previous Rockies look forward to hosting ASG
Next Heggie hoping for an NFL shot

The visiting Houston Texans defeated the Jacksonville Jaguars 30-16 in their Week 15 matchup.Sunday in …