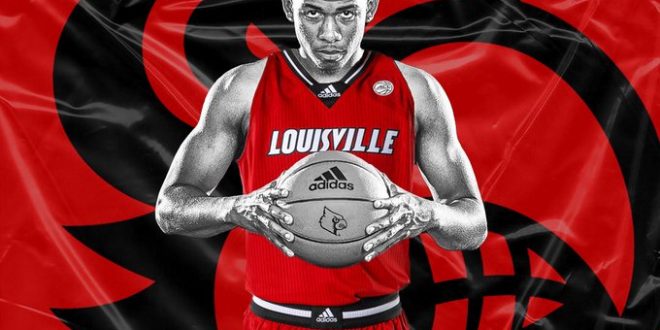 Former Florida basketball guard Noah Locke chose Louisville to be his next home after joining the transfer portal following the Gators' exit from the NCAA Tournament, he announced on Twitter on April 11th. (Photo: Courtesy of Noah Locke/Twitter @_NoahLocke).

After entering the transfer portal a little over two weeks ago, former Gator basketball star Noah Locke has chosen Louisville to be his next home. Locke, a rising senior, announced Sunday via Twitter that he would be joining Chris Mack’s program after three seasons in Gainesville where he was known as the Gators’ top option from behind the 3-point line.

The Gators are no stranger to the heavy influx of players in the college basketball transfer portal this year. Locke became the third out of four Gators in the portal to choose his new destination so far. Last week, Omar Payne announced his commitment to Illinois, and Osayi Osifo committed to be one of former Gator assistant Jordan Mincy’s first recruits at Jacksonville. Locke’s decision leaves Ques Glover as the only former Gator in the portal still currently without public plans for next season.

Although Colin Castleton will be testing the NBA Draft waters this summer (he’s expected to return), Tre Mann and Scottie Lewis have signed agents, sealing their departure from Gainesville. Yet, Mike White is also building through the portal this offseason. Florida has already landed Penn State guard Myreon Jones, Missouri-Kansas City guard Brandon McKissic, and Boston College forward C.J. Felder. White likely has a few more spots to fill with a total of six players definitely gone from the 2020-21 roster so far.

Locke’s move to the transfer portal surprised many seeing as he was a regular starter and key part of the Gators’ (15-9, 9-7 SEC) run to the 2nd Round of the NCAA Tournament. The 6-3 guard out of Baltimore averaged 10.6 points per game last season, shooting 40.6% from the arc.

He’ll look to make an immediate impact for a Louisville basketball team that was the first squad out of the NCAA Tournament this year. The Cardinals (13-7, 8-5 ACC) needed to add shooting following a season where they shot 30.8% from 3 as a team, good for 303rd in Division 1, and ranked last in the ACC in makes per game. They’ve done just that through the transfer portal, adding Miami’s Matt Cross and Marshall’s Jarrod West. They and Locke will look to make Louisville a threat from deep next year.

Louisville’s losses in the transfer portal haven’t perhaps been as weighty as Florida’s. Role players Josh Nickelberry and Aidan Igiehon will search for other schools in the portal this year. The big question for who the Cardinals return lies in the backcourt. First-team All-ACC selection Carlik Jones was Louisville’s main course of offense in 2021; he entered the draft process as of yesterday but has not hired an agent. Standout sophomore David Johnson’s status is still unknown. Both of their returns paired with transfer additions and veteran center Malik Williams opting into his extra year of eligibility could make the Cards a contender this time next year.

Caleb Wiegandt is a first-year Journalism student on the Sports and Media track in the University of Florida's College of Journalism and Communications. He has previous bylines in USA Today, Yahoo Finance, and The Louisville Courier-Journal before arriving at ESPN Gainesville. Caleb is a proud graduate of Holy Cross High School in southwest Louisville, Kentucky, where he was born and raised. You can reach Caleb at cwiegandt@ufl.edu.
@@CalebWiegandt
Previous Bolts Control Preds, Get Shutout Win
Next Gators Take One In Knoxville