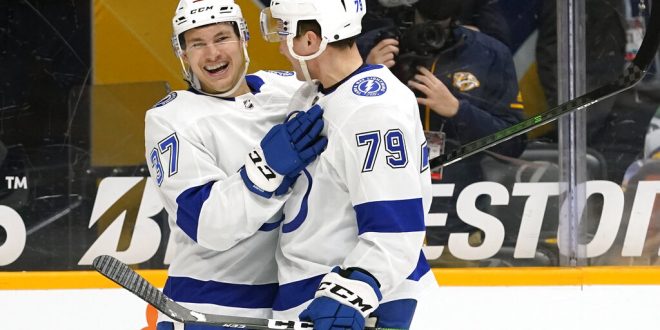 When the Lightning and Predators have squared off this season, Tampa has dominated every inch of the ice, excluding a Mar. 15 loss in which star goalkeeper Andrei Vasilevskiy was given a night off.

That trend held true last night, as the Bolts (28-11-2) took down the Preds (22-19-1) in shutout fashion, this time on a huge performance from Vasilevskiy. Although the goals did not come in a flurry as per usual for the NHL’s 2nd-best scoring offense, Tampa put one in the net in each period all via different players.

The loss was only Nashville’s third defeat in their past 14 games, dating back to that most recent matchup with Tampa Bay. Longtime star goalie Pekka Rinne made an appearance in goal in the absence of Nashville’s starter, Juuse Saros, in what has become more limited time on the ice for the 12-year veteran.

Vasilevskiy (36 saves) had another gem of a game as he recorded his fourth shutout of the season, good for second in the league this year. He’s been the anchor of a Lightning defense that is averaging a cool 2.44 goals against per game average.

In the 6-minute mark of the opening period, Tampa got the scoring going. Mikhail Sergachev made a nice move to evade two Nashville defenders and skated up the right side before handing it off to Yanni Gourde.

Gourde took the feed and brought it near the right circle before spinning and dumping it off to Ross Colton for a close-range score.

Vasilevskiy and the Bolts defense would not have an easy road to keeping the shutout. They saved a 1-0 lead heading into the 2nd despite 18 shots in the 1st from Nashville’s offense. The Predators could not take advantage of a power play late in the period after Vasilevskiy recorded three saves during Nashville’s advantage.

The Predators seemed to have tied it up in the middle of the 2nd period. A closer look after a Tampa Bay challenge ruled offsides and no goal for Nashville.

That set up Tampa to extend their lead later in the 2nd. Near the 14-minute mark, Erik Cernak took feeds from Ondrej Palat and Brayden Point to make the score 2-0. Cernak took the puck outside the right circle and made a shot that bounced off of Mikael Granlund’s stick and then Ryan Ellis’ leg past Rinne into the net.

The goal was only Cernak’s second of the season. Gourde would put in a late empty-net goal in the 3rd to round out the scoring.

The Lightning and the Predators will square off for the final time in the regular season on Tuesday, again in Nashville. Tampa leads the season series between the clubs 6-1. Catch that game on ESPN+ starting at 8 pm.

Last night’s win puts the Bolts into a tie atop the Central Division with the Carolina Hurricanes, the latter third of the NHL schedule still to play. Carolina and Tampa Bay will face off next Monday and Tuesday, both matchups in Amalie Arena.

Caleb Wiegandt is a first-year Journalism student on the Sports and Media track in the University of Florida's College of Journalism and Communications. He has previous bylines in USA Today, Yahoo Finance, and The Louisville Courier-Journal before arriving at ESPN Gainesville. Caleb is a proud graduate of Holy Cross High School in southwest Louisville, Kentucky, where he was born and raised. You can reach Caleb at cwiegandt@ufl.edu.
@@CalebWiegandt
Previous Magic host struggling Milwaukee team
Next Breaking: Former Gator Locke Chooses Louisville