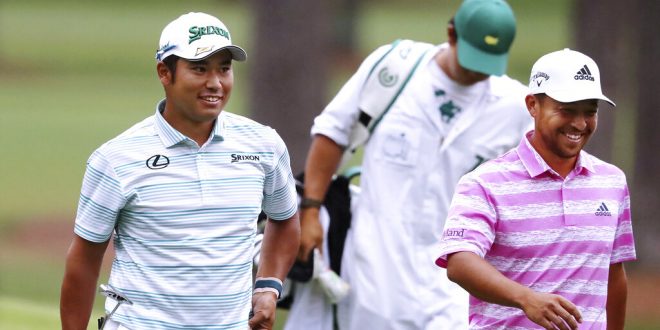 Hideki Matsuyama, left, and Xander Schauffele smile after they both made eagle putts on the 15th green during the third round of the Masters golf tournament at Augusta National, Saturday, April 10, 2021, in Augusta, Ga. (Curtis Compton/Atlanta Journal-Constitution via AP)

The pimento cheese sandwiches have been chilled, the vibrant azaleas have bloomed, and the final day of golf at Augusta National is almost underway. Here is everything you must know going into the final round at the Masters.

The modern-day Masters magician, better known as Jordan Spieth worked his Augusta magic to pull himself into contention shooting an even 72. Following his win at the Valero open a week ago, Spieth looks primed and ready to keep his name in the discussion and maybe add to his green jacket collection.  Perhaps no one is more well suited to gun for the top of the leaderboard than Spieth who plays the course at Augusta with ease and expertise like no other. Even when it seems he hits into a bad spot, he always somehow pulls himself back into seemingly effortlessly.

But, six others sit between Spieth and the top. One of those is Corey Conners’ who sunk a hole-in-one on No.6. His hole-in-one is the second of the 2021 Masters, joining Tommy Fleetwood’s ace on No. 16 on Thursday. Conners followed up his ace with a birdie on No. 7, cementing his place among the contenders. He finished his day at 6-under after a third-round score of 68.

Quiet Ascension to the Top

Also, gunning for the lead includes Marc Leishman and Xander Schauffele who are tied for second along with Rose and Zalatoris after finishing seven under. Quietly, the pair ascended up the board as the day progressed. Schauffele had four birdies, an eagle and two bogeys in his 68, while Leishman had four birdies in his 70.

However, a storm rolled into Augusta mid-afternoon around 3 p.m. to halt play. The weather system changed the conditions of play and introduced a new contender. Hideki Matsuyama hit a seven-under 65 to take a four-shot lead in the final hours of the third round. Even more impressively, Matsuyama recorded the first bogey-free round of the week on Saturday as well. If he can hold onto his four-stroke lead, he would become the first-ever Japanese man to win a major championship.

” Maybe I wouldn’t have believed it but I did play well today, my game plan was carried out and hopefully tomorrow I continue good form,” he said when asked if thought he would lead at The Masters.

But, Justin Rose still thinks it is anyone’s game, especially those who sit at seven under. Rose used Matsuyama as the prime example, using his late run on Saturday to prove that it isn’t over until the final 18 is played.  For reference, the last 31 Masters have been won by a player starting the final round in the top 5. In the top seven specifically, only Rose and Spieth have won a major before. Rose with one and Spieth with three, one of which was a win at Augusta.

Four players are T2 and four shots back.@JustinRose99 says it's not over yet. pic.twitter.com/2hHS7gEmjs

With it all still on the table, some of the world’s best golf will be on display at the quintessential golf venue in all of the world. After all, it’s Sunday at the Masters. Enjoy accordingly.