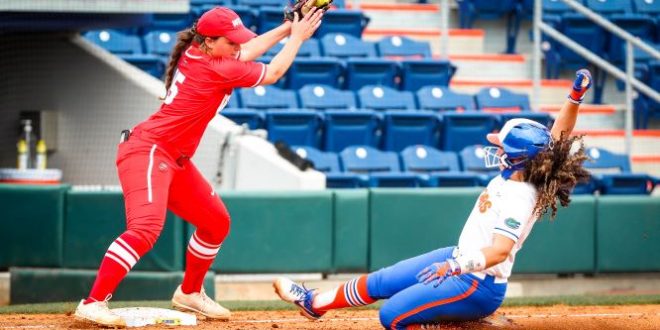 Saturday’s doubleheader for Gators Softball provided differing opposition. The opening game welcomed Western Kentucky to Katie Seashole Pressly Stadium. The Gators used the first and sixth innings to run away from the Hilltoppers. Later, the Gators played an exhibition game against Canada Softball, which they lost 5-2 in an abbreviated game.

Gators Edge Hilltoppers in Game One

Although Western Kentucky only has three wins against teams with a winning record, this is no slouch of a team. In fact, these Hilltoppers beat No. 7 Kentucky in a nine-inning scrap on March 24.

That being said, the Florida Gators Softball team has been rolling recently. Entering the first game of their Saturday doubleheader on a four-game win streak, the Gators offense and defense have been elite.

That trend continued in the first inning against Western Kentucky.

Charla Echols continued her personal form with a solo shot over the fence in right-center field. It was the same spot she delivered key RBIs against USF on Wednesday. Julia Cottrill matched Echols by bombing a two-run homer to the same spot just two batters after Echols.

However, Western Kentucky would not go away quietly. Hilltopper first-baseman Paige Carter gave Florida starting pitcher Elizabeth Hightower all kinds of issues. For example, in her leadoff at-bat in the first frame, she faced a 14-pitch at-bat to open the game. In her second at-bat, she took Hightower over the fence in left field to cut the Gators’ lead to two.

With the Gators unable to add to their first-inning tally, WKU’s Kennedy Sullivan upped the pressure with a solo shot of her own. As a result, Katie Chronister replaced Hightower to shut down the Hilltoppers, and the Gators responded to the pressure.

RBIs from Hannah Adams and Emily Wilkie re-established the three-run cushion for Tim Walton’s club. Then, Jaimie Hoover’s sliding catch in left field in the top of the seventh led to a double play by throwing out another WKU runner at second.

Katie Chronister remained in the circle going from the WKU game into the second game of the doubleheader. The senior did well, but the Canadian experience and talent showed.

In the first inning, it was actually the Gators to jump out to an early lead. Similar to the previous game, Charla Echols delivered the first RBI with a double to score Hannah Adams. Throughout the two games, Charla Echols combined for three RBIs to lead the Gators.

However, Canada quickly established their presence in the exhibition.

Perhaps the Gators were getting a little too comfortable in the doubleheader, or it could have been Canada’s expertise. Regardless, Canada established a lead of their own in the second inning. Larissa Franklin’s double scored Erika Polidori. Next at-bat, Emma Entzminger’s single scored Franklin.

The Gators leveled the game in the bottom of the third inning through a Charla Echols sacrifice fly after Cheyenne Lindsey’s triple. But, yet again, Canada bounced right back with three runs in the fourth.

The game met an early end in the fifth inning due to inclement weather surrounding Katie Seashole Pressly Stadium. As this is an exhibition, it does not count against Florida’s record.

Moreover, the game against Canada allows Florida to see where they are. For example, Florida’s next SEC series is on the road against highly touted Alabama, their toughest test of the season.

This may be down the road, but a Saturday doubleheader helps to get the team to their best position.

Originally from Seminole in the Tampa Bay area, Kyle is a contributor for ESPN Gainesville as well as local NPR and PBS affiliate WUFT. Kyle wants to get into sports with a lofty dream of being a sports broadcaster. He was raised playing soccer and baseball while watching hockey and football, so the knowledge about various sports is fairly extensive.
@KyleFanslerUF
Previous Gators fall to Tennessee in Series Opener
Next Masters Sunday- The Final Round at Augusta