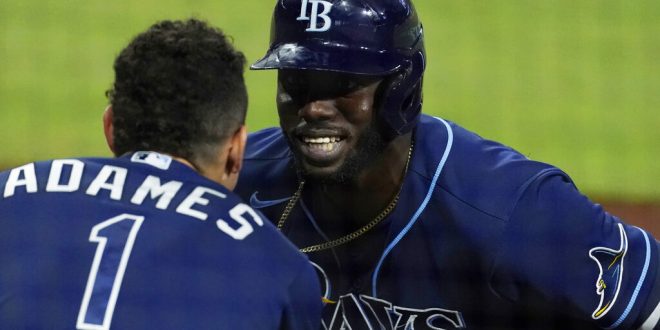 The Tampa Bay Rays will aim for the sweep against the Yankees Sunday as the two teams close out a three-game series.

The AL-champion Rays had the better of New York the first two games and can get the sweep for their first home series of the season. Meanwhile, the stacked Yankees team will try to take one game from Tampa Bay.

Today’s game will also be played in St. Petersburg, Florida, and the first pitch is set for 1:10 p.m.

RAYS DOUBLE UP THE YANKEES! @RaysBaseball win 10-5 in their home opener against New York! Catch the postgame show next on Bally Sports Sun! pic.twitter.com/FRFLeEW3fm

The first game of the series showcased some offensive firepower from the Rays, who took the win 10-5. The bats were on fire early, as Tampa Bay did most of its damage in the early innings.

Willy Adames looked sharp, going for an RBI double and a solo homer in the first game of the series.

The second game of the series also went to the Rays, a 4-0 shutout win that displayed their defensive prowess and deep pitching rotation.

The Rays pitchers struck out nine and allowed just five hits in the shutout. Solo homers off the bats of Austin Meadows and Randy Arozarena propelled the offense.

Tampa Bay displayed its versatility once more against the Yankees. The range they display on offense and defense is a strong part of their World Series run from last season.

Going for the Sweep

Today’s game will feature Jordan Montgomery on the mound for New York, while Rays prospect Brent Honeywell Jr. will make an appearance for the first time since 2017.

Depending on how Honeywell Jr. does in his return, the Yankees could win the last game of the series. But if Honeywell does well, Tampa Bay will surely earn the sweep.

The Rays have suffered a few big losses to the rotation, so Honeywell Jr. may need to pitch longer in the game to help his relievers. Michael Wacha will relieve Honeywell Jr. first today.