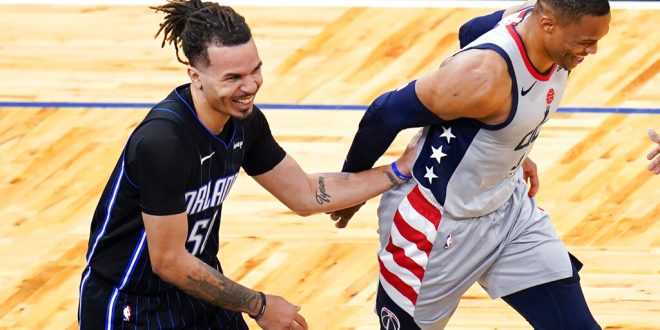 Orlando Magic guard Cole Anthony, left, jokes with Washington Wizards guard Russell Westbrook after Anthony was called for goaltending on a Westbrook shot during the second half of an NBA basketball game Wednesday, April 7, 2021, in Orlando, Fla. (AP Photo/John Raoux)

Sunday night, the Orlando Magic hosts a struggling Milwaukee Bucks team that has lost three games in a row. The absence of star player Giannis Antetokounmpo, as well as other minor injuries, is likely driving the losing streak.

Though the Magic have lost four in a row, it’s not often that a team like Milwaukee has losing spurts like this. Orlando needs to consistently put up a fight to try and knock off one of the league’s better teams.

The Bucks will be without Giannis Antetokounmpo once again as he battles through a knee injury. Meanwhile, both Jrue Holiday and Khris Middleton are set to return to the lineup after each missing a game with knee injuries of their own.

Tonight’s game will be the fifth consecutive Antetokounmpo has missed, with the Bucks going just 1-3 in his absence thus far.

The Greek Freak has put up monster numbers this season: 28.8 points per game and 11.4 rebounds per game. In seven games without Antetokounmpo this season, Milwaukee has gone 3-4.

With so many big pieces around Antetokounmpo and Orlando going through a tough rebuild, the Bucks will surely win tonight’s matchup.

The Magic are midway through a franchise-changing rebuilding phase that is going less than ideal right now. Orlando has quickly become one of the worst teams in the league after shipping away most of its starting lineup, including Aaron Gordon, Nikola Vucevic and Evan Fournier.

Orlando’s return on these trades hasn’t been substantial; the bulk of their return consists of draft picks and draft pick swaps.

With lots of young, developing talent such as Mo Bamba and Cole Anthony, the Magic will try and build around the young bloomers for the next few years. But the team still lacks a superstar player, someone who is all-star caliber and can put the team on their back night in and night out.

As of now, the Magic are in no position to win. But with the picks they received at the trade deadline and some of the untapped talent on their team now, they could try to land a superstar in the draft or in a trade soon. Cade Cunningham is an enticing option available with the first pick, granted Orlando wins the draft lottery.