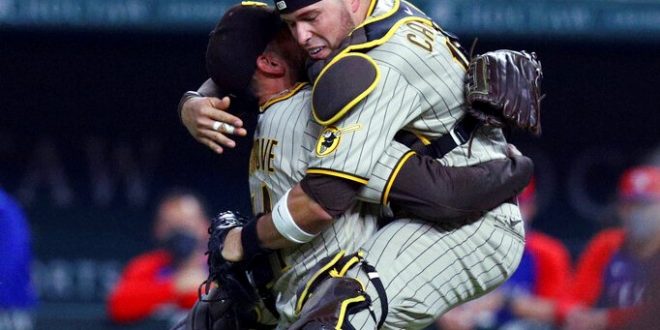 It was a Friday night. A clear sky, roughly 70 degrees. Joe Musgrove strutted to the mound for the Padres a little after 8 p.m. He would stay there until the final out in the ninth inning. The young right-hander may not have known that day that he would make history throwing the first no-hitter in Padres franchise history.

At 28 years old, the California native accomplished what many pitches aspire to do. In nine straight, Musgrove threw 112 pitches, striking out 10 batters. With no walks, the only base-runners the Rangers saw was outfielder Joey Gallo after being hit by a pitch. Take that away and Musgrove was inches from a perfect game. Following the final out, Musgrove described the moment as surreal.

However, Musgrove did not think he’d even finish the game. The 6-foot-5 ace thought his pitch count was higher than it actually was around the sixth inning. He did not envision himself still standing on the mound past six. He was content with his performance up to that point. Although, the 2011 draft pick began to see the light at the end of the tunnel–he could throw a no-hitter.

Musgrove was not the only ballplayers to make history on Friday. Padres catcher Victor Caratini was on the receiving end of the no-hitter, but it was not his first. Caratini became the first catcher in MLB to catch consecutive no-hitters in different leagues. Musgrove dubbed his catcher the brains behind the operation in Friday’s game.

The last no-hitter Caratini caught last season on Sept. 13 from Alec Mills for the Chicago Cubs.

Next For The Padres

Currently, San Diego sits one game behind the World Series Champion Dodgers in the N.L. West, but it’s still early. After sweeping the Rangers, the Padres travel to Pittsburgh for a three-game series against the Pirates. The first game is tonight at 6:35 p.m. Musgrove is slated to take the hill on Wednesday.