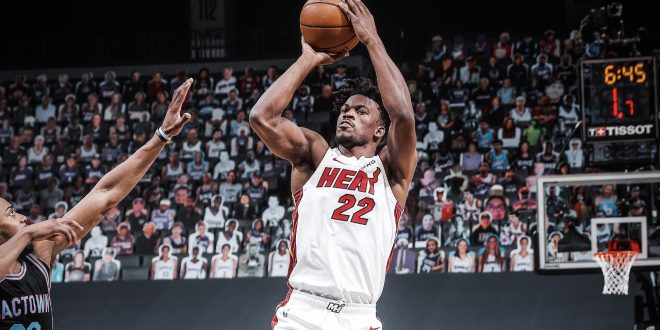 The Miami Heat traveled and defeated the Portland Trail Blazers 107-98 on Sunday. This comes after Miami’s home turf win against the Los Angeles Lakers.

It's W o'clock back home pic.twitter.com/lukvcV2Xqw

Portland came in confidently to the Arena after defeating the Heat just a couple weeks prior, but Miami was lacking star player Jimmy Butler during that March matchup.

The Trail Blazers started the game with a lot of energy. They performed multiple solid plays in the first half but ultimately fell to turnovers and inconsistent shooting. The first quarter ended with the Blazers leading the scoreboard 31-25, but the Heat picked up the pace in the second quarter. Portland center Jusuf Nurkic was holding the defense together, but the turnovers and consistent Heat scoring were no match. The Heat led 56-48 heading into the break. Unfortunately, Nurkic didn’t return to the court in the second half after a back injury.

Due to the numerous turnovers paired with Miami’s strong defense and occasional scoring, Portland wasn’t able to catch a break, ultimately falling to the Heat.

After missing 16 games this season, Jimmy Butler was back and ready to attack. The Miami forward ended the matchup with 20 points, four rebounds, five assists and four steals.

The Trail Blazers had some notable players as well. Both CJ McCollum and Norman Powell led Portland in points with 17 each and Damian Lillard ended with 12 points.

The Heat is now fifth seed in the Eastern Conference, with a 28-25 record. Miami is set to hit the road to take on the Phoenix Suns on Tuesday at 10 p.m., while the Portland Trail Blazers will go head to head against the Boston Celtics Tuesday at 10 as well.