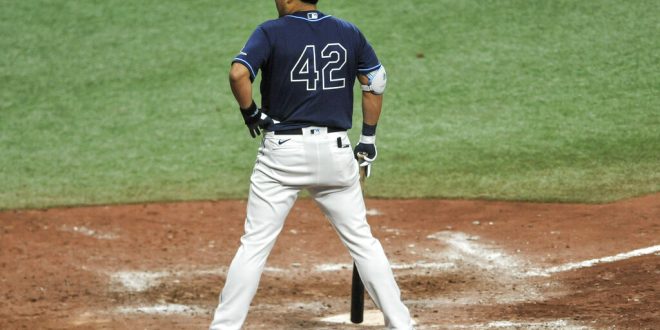 Tampa Bay Rays pinch hitter Yoshi Tsutsugo stands at the plate after he called out on strikes for the final out of the 10th inning during a baseball game against the Texas Rangers Thursday, April 15, 2021, in St. Petersburg, Fla. (AP Photo/Steve Nesius)

The Tampa Bay Rays dropped their third consecutive game Thursday night after falling to the Texas Rangers in extra innings.

With the game tied up in the 10th inning, Rangers right fielder Adolis Garcia stepped up to the plate and was able to launch a two-run homer into the right-field stands. Garcia’s first-ever big league home run was the deciding factor in Thursday night’s contest.

Texas, now winners of three straight, put together 11 hits in the finale of this four-game series. Leading the way for the Rangers was second baseman Nick Solak, who finished the game with one home run and two RBIs.

After evening the score at 4-all in the seventh inning, Tampa Bay did not put any more runs up on the scoreboard. The Rays also struggled to make the most of players on base, going 3 for 13 with runners in scoring position. In all, Tampa Bay left 12 players on base.

As a squad, the Rays put together seven hits and were carried by third baseman Mike Brosseau. He managed to put up one home run and two RBIs in five at-bats.

Looking to snap its losing streak, Tampa Bay travels to take on the Yankees in a three-game series starting tonight. Michael Wacha is scheduled to take the mound for the Rays in Game 1. First pitch is at 7:05 p.m.

Furthermore, the Rangers will look to keep their winning streak alive when they take on the Baltimore Orioles in a three-game series beginning tonight at 8:05 p.m. Mike Foltynewicz will be on the mound for Texas, while Jorge Lopez will start for the Orioles.