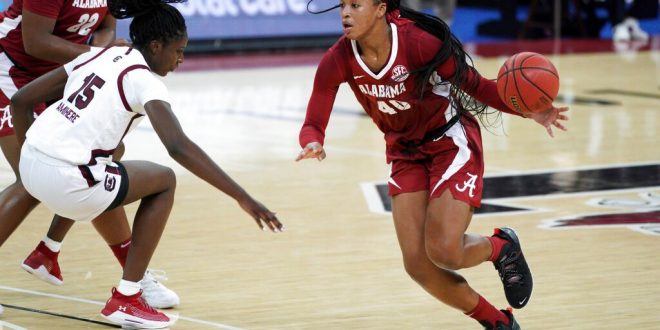 This week the WNBA held its second virtual draft in preparation for its 25th season. Three of the overall nine SEC players made it into the top ten of the draft including Chelsea Dungee, Jasmine Walker, and Rennia Davis.

The WNBA announced that their 2021 season will begin May 14 with the New York Liberty facing the Indiana Fever for the first game of the season.

The Dallas Wings used their number five pick for Chelsea Dungee who is coming in from the University of Arkansas. Within Dungee’s senior year, she earned All-American honors and helped Arkansas finish at 19-9 with an NCAA Tournament berth.

In addition, Dungee led the SEC in points scored by averaging 22.3 per game. Overall, Dungee scored 2,147 within her college career which is now the new record held by an Arkansas player.

“I came from a small town, being so close to Oklahoma and to Arkansas means so much to me,” explained Dungee. “I’m so happy that Dallas picked me. I can’t even describe the feeling, but like I said, anything is possible.”

Alabama’s Jasmine Walker became the seventh pick when she was drafted by the Los Angeles Sparks. Alabama has not produced a first-round pick since 2000. Walker led her team to a 17-10 season finish and to the second round of the NCAA Tournament.

Within her season year, Walker made program history when she scored 41 points in a single game. In addition, she averaged 19.1 points and 9.4 rebounds per game. Head Coach and General Manager Derek Fisher stated that Walker will be a great fit for his roster.

“Jasmine can both play on the wing and can stretch the floor as a big,” explained Fisher. “She’s also one of the best defensive players and rebounders in this draft class. We’re ecstatic to add Jasmine Walker to the Sparks.”

The Minnesota Lynx chose Rennia Davis for their number nine pick. Davis enters the WNBA from the University of Tennessee where she became a three-time All-America Honorable Mention and All-SEC selection.

The 6-foot-2 guard/forward led her team to a 17-8 final record, a third-place mark of 9-4 in the SEC. Davis averaged 17.3­ points and 8.8 rebounds per game. Lady Vol head coach Kellie Harper stated that she is proud of the player that Davis has become.

“She has worked very hard to develop herself physically and improve every area of her game,” said Harper.

Parker Welch is a Junior at the University of Florida majoring in Sports Media at the College of Journalism & Communications.
@parkerrwelch
Previous Rays Drop Series Finale Against Rangers in Extra Innings
Next Lightning Bounce Back and Defeat Panthers in Overtime, 3-2