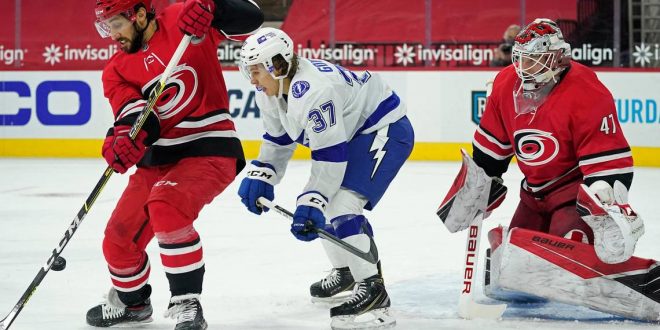 There were just over two minutes to play in overtime when Tampa Bay Lightning winger Alex Killorn stole the puck along the boards and centered a backhand pass to the slot for center Yanni Gourde.

Gourde’s 16th goal this season — which trails only centers Brayden Point and Steven Stamkos — lifted the Bolts to a 3-2 victory over the Canes Tuesday night in Tampa.

The Lightning now lead the Central Division with 30 wins, but the Hurricanes and Panthers share a one-point advantage over the Bolts (63) after Carolina picked up its fifth OT loss.

The Lightning found twine near the end of the first period when Killorn netted his 12th goal this year on a nasty breakaway back-hander.

Johnny ➡️ Killer for this beauty on a breakaway! pic.twitter.com/scAyMTBWZo

Two minutes into the second period, Point notched his 300th point on a power-play goal that put Tampa up 2-0. Point deflected a snapper from defenseman Victor Hedman over Mrazek’s blocker-side shoulder.

Bolts goaltender Andrei Vasilevsky made 25 saves but surrendered two unanswered goals in a 12-minute span to preserve Carolina’s comeback hopes. Midway through the second period, Canes winger Andrei Svechnikov cut the deficit in half on a power-play wrister.

Just over a minute into the third, Carolina blueliner Brady Skjei pounced on a loose puck and used center Sebastian Aho’s screen to beat Vasilevskiy glove-side.

Brady with a beauty! pic.twitter.com/6Z3tkmVC04

The teams will meet again in Tampa Wednesday as the Bolts look to steal the division lead with another win and a Panthers loss in regulation.

Hello, I am currently a junior at UF studying sports media journalism with a concentration in Political Science. I contribute web and radio content weekly for WRUF ESPN Gainesville. Be sure to check out some of my recent articles!
Previous Florida Volleyball Loses To Wisconsin In Five Set Battle Of 2021 NCAA Tournament
Next Miami Heat Look to End Strong