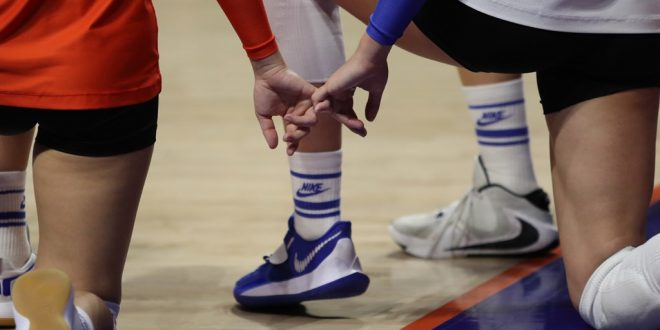 The No. 8 seed Florida Volleyball brought the No. 1 Wisconsin Badgers to a five-set battle in the elite eight of the 2021 NCAA Tournament last night. Ultimately, the Badgers defeated the Gators 3-2 to end Florida’s season. Florida finishes their season with an overall record of 21-4 while Wisconsin continues on in the tournament with an undefeated season.

The first set established the match-up to be close from the get-go when the Badgers were forced to win by two and ended the game at 28-30. On to the second set, the Gators came back stronger and leveled the matchup 1-1 when they came out on top at 25-18. Wisconsin responded in the third set with another close game and won 22-25. The fourth set only intensified the matchup when the Gators defeated the Badgers 25-18 to force the game into a tie-breaker.

The stage was set for a fifth-set tiebreaker. The Florida Gators entered the fifth set with a fierce pace and gained the upper hand right away. The tone of the set changed at the 9-6 mark when the momentum seemed to change after the Badgers grabbed a kill to end a long rally. Wisconsin went on a serving run to make up their deficit and from there maintained the lead for the remainder of the game.

Despite the loss, Florida led Wisconsin in each statistical category apart from service errors. Thayer Hall grabbed 23 kills while T’ara Ceasar notched 17 with 68 attacks. Libero Elli Mckissock recorded 23 digs from the backcourt while Marlie Monserez recorded a career-high 22 digs. Up at the net, Lauren Forte and Holly Carlton both blocked 7 attacks. As a team, Florida notched 63 kills for a hitting percentage of .170%.

On the Badgers side, Dana Rettke led the way with 16 kills, 3 digs and 5 blocks. Then, Molly Haggerty recorded 17 kills, 2 digs, and a .261% hitting percentage. Finally, setter Sydney Hilley gave her hitters 49 assists and then added 17 kills of her own.

End of a Chapter

Head Coach Mary Wise revealed after the game that none of her seniors would be taking the extra eligibility year that COVID-19 left. She also noted how special this team has been with facing the many obstacles the coronavirus year has thrown at them.

“This was a heavy-weight match between two great teams from two great conferences,” explained Wise. “Awfully proud of this team and the growth they embraced starting way back in August. We asked more from this team for a longer period of time than any team in our history.”

Parker Welch is a Senior at the University of Florida majoring in Sports Media at the College of Journalism & Communications.
@parkerrwelch
Previous Gators Seek Sixth-Straight Win
Next Gourde’s Second Effort Lifts Bolts Over Canes in OT