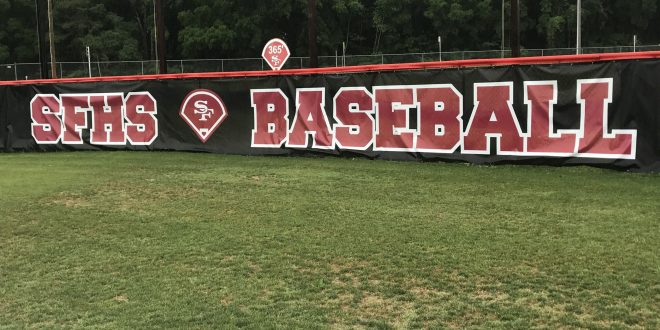 As Travis Yeckring tosses pitches to his players during practice, there’s a light-hearted energy about him. He yells, “What are you doing swinging at that?” now and then, but the tone of the comment is purely instructional and relational.

Any unknowing fan walking by would think Yeckring has been the head baseball coach at Santa Fe High School for years. The truth is that this is just his first full season coaching the Raiders.

“Coach Yek,” as his players call him, stepped in as the Raiders head coach in June of 2019 following that year’s baseball season after the previous coach, Mac Rendek, stepped down. He inherited an eager baseball fanbase and a 2020 baseball season that would be anything but usual.

“The baseball tradition here is so strong,” Yeckring said. “I know how passionate they are about baseball in this community. [So], I knew I would have a fair amount of talent and a ton of support.”

That summer, Yeckring stepped into a program that went 20-7 the previous year and finished first in their district.

A former assistant at Buchholz and Santa Fe College, he had coached his fair share of baseball, so he said he knew how to deal with the outside pressures of continuing past successes.

“Pressure is a privilege,” he said. “They don’t put pressure on teams they don’t think are going to be any good. I told our guys to raise their expectations as far as what success is and how hard it is to get to the top.”

What he couldn’t have prepared for, though, was the whirlwind of a season that loomed ahead of him. No one could.

On March 13, 2020, the Raiders sat at 6-3 on the season and prepared to take on Baker County in a road game. Amid the onset of the COVID-19 outbreak, Yeckring didn’t even know whether or not the game would happen. But both teams took the field, and the Raiders lost in a game that didn’t end up counting.

The very next day, Santa Fe High got word that the season would be shut down for two weeks. Yeckring said he preached optimism to his team after the initial announcement, but eventually, two weeks turned into the whole season.

On March 13, Alachua County decided to cancel sports through March 29. The Florida High School Athletic Association then made the cancellation permanent on April 20, canceling all spring sports.

Yeckring said what followed next was gut-wrenching.

But the seniors weren’t the only players that felt the brunt of the shortened season. Twins Devan and Devante Mitchum were sophomores on the team during the 2020 season, and they both had to play their final game with their older brother, Dave, much earlier than they thought they would.

All three brothers, from a family of four, played in a variety of sports during high school, but baseball was the one that bonded all three of them together. So, Devante said seeing his older brother’s final season get cut short was heartbreaking.

“We’re trying to get through it. We just wish we had finished out the season with him last year. This year, we just want to do something big for him,” Devante said.

The Mitchums come from a family of athletes, with Devante, Devan and Dave all playing baseball and their fourth brother, Dejuan, playing soccer for the Raiders.

And Devante and Devan, or “Te Te” and “Dev” as they’re called on the team, make their presence felt on the field, as well. Devante and Devan rank second and third, respectively, on the team in batting average of players that have played in at least 10 games. Don’t tell them that, though, because only five points separate their .365 and .360 figures.

The Mitchums are just a couple of the many players that coach Yeckring has seen step up their game from last season to propel their team to an excellent season.

Yeckring’s squad vaulted out to a 15-1 start and even went on a 14-game win streak. They ranked as the best 4A team in the state for a time before they lost 5-4 in a 14-inning contest to Clay.

Devan Mitchum said after making it through the shortened season in 2020 and all of the challenges that COVID-19 has thrown, the loss to Clay was the first time the Raiders have faced adversity in 2021.

I HATE losing, but man what a freaking game. Both teams competed their asses off for 14 innings. Couldn’t be prouder of our @SFHSRaiderBSBL guys. And much respect to @CHS_Baseba11 https://t.co/xjkxQDFrNv

The Raiders wrapped up their regular season with a 21-2 record and finished at second place in 4A District 2.

Yeckring said his team got a tough draw in their division this year, with three different teams posing a real threat to make it to the state playoffs. Clay gained first place in the division after their narrow victory over the Raiders, so Santa Fe sits at second in the division in front of the third-place Suwannee Bulldogs.

“They didn’t do us any favors with how tough our district is, but that’s all right. We wouldn’t want it any other way,” Yeckring said. “[It’s] more rewarding when it’s harder.”

And that seems to be a common theme for this Raiders team: overcoming adversity.

From shaking off a disappointing nine-game season in 2020 to losing in a four-hour-long heartbreaker to Clay, the Raiders have faced their fair share of hurdles.

But just as common as the obstacles that beset the Raiders is their perseverance through it all. After a 6-3 campaign in 2020, the Raiders rattled off 14 straight wins for one of their best starts in program history.

After seeing that streak end in an extra-innings loss, they rebounded the next day with a 13-0 win over Gainesville.

To come out and play well with a bunch of energy after last night is a tribute to how tough this team is.

Proud of how our guys responded after a 12 round (14) heavyweight fight. https://t.co/bZnkxYFqLq

The key to keeping that winning mentality after a setback? According to senior pitcher Ryan Brown, the answer is playing every game like it’s their last.

Brown has seen his numbers skyrocket in his final season as a Raider. Brown boasted a 0.24 ERA on nine wins and no losses while striking out 85.

He said his mentality has shifted since seeing what life without baseball is like.

“It’s been really, really fun,” Brown said. “We’re all just enjoying it like it’s our last game every game because you never know when it’s going to be your last game.”

Until last season, Yeckring said, “playing every game like it’s your last” just felt like a cliche. But after he saw his season cut short with very little notice, he said it’s a legitimate mantra.

Yeckring said that even during their winning streak, the Raiders stuck to this philosophy: enjoy the game.

Following the Raiders’ heavyweight battle with Clay, Yeckring had one message for his team: let’s win another 14 games. He said he told his players to do what they’ve been doing all season and take it one game at a time.

“That was one of the best games I’ve ever seen or been a part of,” he said. “I told them when that ended we didn’t lose for six weeks. So, if we don’t lose for six more weeks, we’re going to be raising about three trophies. So let’s start it back over.”

And he’s right. With the playoffs fast approaching, another six weeks of winning would plant the Raiders deep in the state championships.

As the two seed in the district tournament, they’ll host the three-seeded Suwannee on Tuesday night. With a win, the Raiders would advance to a rematch at Clay on Thursday.

Brown said all of the success from this year has been incredibly rewarding, but now it’s time to go and make a playoff run in honor of last year’s seniors.

So, the Raiders will look to continue their successes of the 2021 season in coach Travis Yeckring’s first full season as the head coach at Santa Fe High. After experiencing the struggle and hardship of their 2020 season, Yeckring and the Santa Fe Raiders have come out on the other side stronger than ever and ready to make a deep run in the playoffs.

I'm a third-year student at the University of Florida passionate about storytelling and sportswriting. My goal is to work in communications for a professional sports team after I graduate.
Previous Pat Dooley’s Back Nine April 23rd
Next Football World Preparing For 2021 NFL Draft