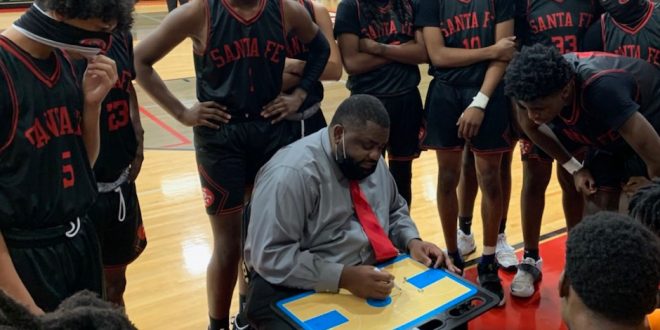 After 21 years and a successful 2020-2021 season, Santa Fe High School boys basketball coach Elliot Harris is stepping away from the program.

He guided the team to its first championship in school history this season, falling just short of a 4A state title.

While it was difficult to break the news of his retirement to his players, he ensured them everything would be OK.

“That was one of the hardest things that I’ve ever had to do,” Harris said. “I’ve got some tremendous young men. They’re great.”

“He’s like another dad to me,” Jenkins said. “He taught me so many things about basketball.”

Harris has decided to step away to spend more time with his wife, Clydina, who is battling cancer. This struggle motivated the team during their playoff run. They even dedicated the season to her.

“We’re going to continue to fight and battle that,” Harris said. “She’s going to win.”

“Coach Harris means a lot to a lot of people, especially our community,” Jenkins said.

Harris is at peace with his decision to retire and has no regrets. In the end, family comes first.

The Santa Fe Raiders endured a deep playoff run during the 2020-2021 season, a season dedicated to Harris’ wife Clydina.

“I really liked the idea,” Ross said. “We got everybody together and we just said for these couple of games, let’s just come together and do what we got to do for him.”

The Raiders proceeded to go 20-6 and made it to the Class 4A State Championship for the first time in school history.

The Raiders fell just short of the title, with Pine Crest High School winning by a score of 90-83 in double overtime.

“It really hurts,” said Jenkins. “But I can’t really let it get to me because you have to move on now.”

The team plans to work hard during the summer in order to come back even stronger. However, they will lose five seniors going forward, including NC State commit Ernest Ross.

Ross put up 18 points in the state championship and provided energy for the team all season.

“He was teaching me how to be a leader,” Jenkins said. “It felt good playing with him.”

This senior class, along with their coach, finished their career bringing Santa Fe High School basketball the furthest they have ever gone, leaving behind a historic legacy.

With five seniors set to leave the program, three starting spots are left to fill.

The graduating 2021 class was responsible for 63 percent of points this season, giving the future Raiders a lot to make up for.

Fortunately for Santa Fe, sophomore Dontrell Jenkins is ready to take over.

The sophomore remained calm under pressure this season and performed at the highest level.

Jenkins assisted the buzzer-beating basket in the state semifinals to get the Raiders to the championship.

Jenkins most notably scored 31 points in the Class 4A State Championship on 59% shooting.

“Dontrell is a kid that lives, breathes, eats basketball,” Harris said. “He just loves it.”

Despite these performances, Jenkins said falling just short of the title showed him just how much work he still needs to do. He said he plans to work on his left hand and getting to the basket during the offseason.

“I want to work hard,” Jenkins said. “I want to prove myself and show coaches I’m the point guard. I want to show them that I can facilitate.”

Jenkins will take the reins of the Raiders after averaging 13 points per game in the 2020-2021 season and looks to hit the 1,000 point mark next season.

He is ready to rise up to occasion.

Any player who is dunking in sixth grade is going to be noticed by college scouts. For senior Ernest Ross, that was exactly what happened.

Receiving his first offer in ninth grade, the senior is now committed to North Carolina State to continue his academic and athletic career.

“It was the vibe and how they approached us,” Ross said. “I used to live with my grandma so them talking to her and her liking them really made me choose [NC State].”

Ross led the team with 18 points and 10 rebounds per game during his senior season, helping bring the Raiders to their first state championship.

However, Ross acknowledges that things will get tougher at the next level, as he joins a team in the NC State Wolfpack that competes in the Atlantic Coast Conference with schools like Duke, Syracuse, Florida State and North Carolina.

Ross is hoping to rise to the challenge at the next level and apply all that he has learned at Santa Fe.

Santa Fe High School senior and NC-State commit @erndastern230 joined me in discussing his future in the NCAA, the retirement of @CoachElHarris and just how early he started dunking. Make sure to listen in!@ESPNGainesvillehttps://t.co/wLYwjtia6o pic.twitter.com/TQiy34bzg1

As the Raiders look forward to next season, the team will be losing five seniors, including starters Ernest Ross, Cayvian Wakeley and Jonathan Lee.

Ross energized and excited the fans through his posterizing dunks and high-flying blocks.

Maybe this is why they call him Poppa…

Head Coach Elliot Harris says many of the alley-oop plays were scripted to bring that energy back to his team. However, sophomore Dontrell Jenkins said there may be a successor among their ranks.

“I’m working with my friend Mason Brown to see if he can catch some this year,” Jenkins said.

Brown is currently a 6-foot-5 sophomore who averaged just over seven points and nearly five rebounds per game. The Raiders will certainly look to get Brown and Jenkins even more involved next year.

It is uncertain who will replace the legendary coach Elliot Harris, however, Harris knows his boys will rise up to the challenge.

“Things happen in life and you’ve got to continue to move forward,” said the head coach.

While basketball is important to Harris, he believes the game is a vehicle to impact the greater community.

“I hope that I’ve left a legacy of excellence off the court,” Harris said. “What we do off the court matters.”

Harris said it will be a huge change for both him and his players, but after 21 years of coaching at Santa Fe, it’s time for him to step down.

“You’re going to have challenges, and there’s going to be some changes, things that you don’t know are going to happen,” Harris said. “But you still have to endure and go through with it. We’ve got some resilient kids, and they 100% understand. They were completely behind me.”