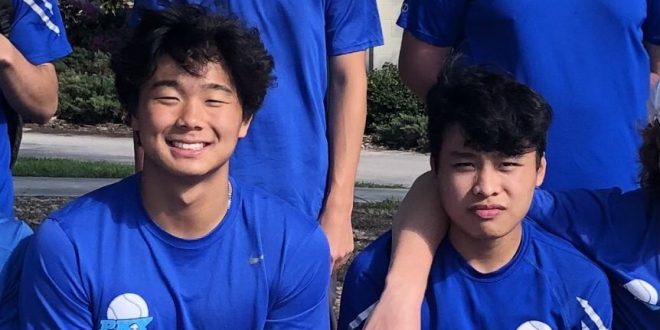 Everyone has heard the metaphor “iron sharpens iron” before, referring to how good teammates challenge each other to be great. Well, for talented juniors Brandon Jeong and Kendrick Esguerra, this statement certainly rings true. These two young men are staples to P.K. Yonge athletics, as they are both actively on three varsity rosters for the Blue Wave. Both friends play tennis and soccer, Jeong swims, and Esguerra plays basketball. Along with being prolific multi-sport competitors, they have both maintained a 3.8 GPA, and are en route to attend respected universities after graduating in the spring of 2022.

Brandon and Kendrick first met in fourth grade while both attending P.K. Yonge. When asked whether they knew each other for a while before becoming close, Brandon answered with no hesitation that they were friends “immediately.”

Through their years at the school, the two grew close. Their tennis coach, Ross Van Boven, jokingly referred to them as “two of the three musketeers,” along with Rad Wittaker, another close friend and tennis player. 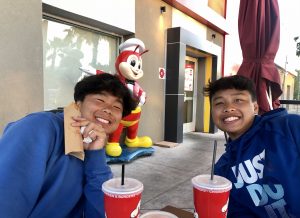 Jeong and Esguerra have always had superb athleticism, stemming from their years of youth sports. They started playing tennis on the team in middle school, but it was not always smooth sailing.

When Brandon was just a fourth-grader, he had his first encounter with a serious sports-related injury. While playing soccer, he had his knees swiped from under him by a goalkeeper and suffered torn tendons in both of his knees. Jeong, being an intense competitor, never gave his knees enough of a recovery period, and he has had chronic issues ever since.

To add insult to injury, he also severely hurt his back exercising before regionals for swimming. Naturally, he never wanted to sit out long enough for his injuries to heal properly.

When asked about these hardships, Brandon remained stoic.

It’s important to remain positive and not dwell on it, and Jeong is a perfect image of this. “I swear I would be 6 foot if I wasn’t built like an old man,” he joked.

Despite these ongoing issues, Brandon continues to compete at a high level and motivate his teammates.

During their interview, the discrepancy between their personalities was put on display. Ken, for the most part, was quiet and allowed Brandon to answer a large portion of the questions. Coach Van Boven described how their demeanors worked together very well on the team:

“Kendrick is a solid, consistent player. He remains cool under pressure, he works very hard, and he quietly contributes to the team,” explained Coach VB. “Brandon keeps everything really light, and he’s more vocal than Ken.”

This ying-yang relationship between their personalities is also showcased in their play styles.

“Kendrick’s mental game is solid. He is patient, and his game is very well-rounded,” Coach VB said. In contrast, “Brandon begins every point aggressively from the baseline. He looks to end points quickly with his forehand.”

Both players’ styles work well for them, and they both make substantial contributions to the Blue Wave’s success.

The P.K. Yonge boys tennis team fell to Episcopal in the regional tournament on Thursday. That loss ended their season, but being juniors, the boys have another year of high school to try to make a run in the state tournament. The team is quite young; their top 3 singles players will be returning for the 2022 season. Borth Brandon and Ken have said they will play their senior season.

When asked about college sports, both Kendrick and Brandon kept it practical. They understand that college sports are an intense time commitment, and education comes first.

“Sports in college take a lot of dedication,” said Brandon. “I’d want to see a future in the sport to make that commitment.”

Despite athletics being a question mark, the boys said they wouldn’t mind living together if they end up at the same school.

One thing is for sure — when they move on to college, the Blue Wave will miss them. They have both made a massive impact on P.K. Yonge athletics. 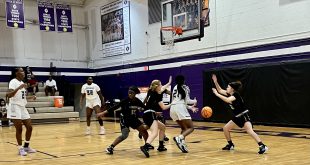