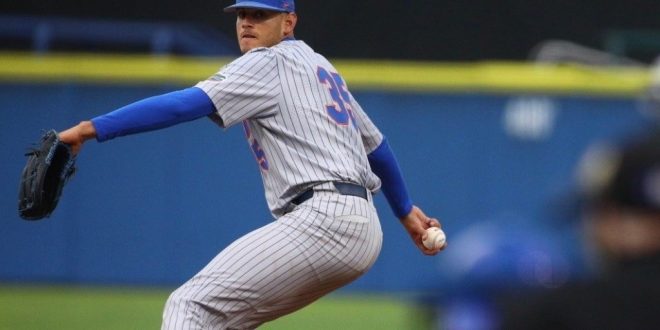 The Kentucky Wildcats took the first game of its baseball series with the Florida Gators late Thursday night at Kentucky Proud Park. Florida battled back to make it a tie game. Nevertheless, Kentucky surged in the eighth inning to bring the final score to 7-5.

Kentucky On The Board

Franco Aleman took the hill for the Orange and Blue where he would last six innings. Aleman would give up five runs, four of them earned, off five hits with three strikeouts. Five is the total number of hits the Wildcats mustered Thursday, but it was enough. Cam Hill started the scoring off with a two-run RBI single in the fourth. Defensive woes seemed to get the better of the Gators. A passed ball allowed Zeke Lewis to score, advancing Hill to second. Shortly after, T.J. Collett would appear to strike out swinging, but he would make it to first base off a wild pitch. Hill would cross the plate.

In the next inning, Ryan Ritter also had an RBI single, making the score 5-0 in the fifth.

While Kentucky dominated the scoreboard, the Gators did have nearly triple the amount of hits at 14. Despite the hot bats, they couldn’t score enough runs to win. They did put up a fight though. Jacob Young brought the first run in with a sacrifice fly in the sixth. However, the seventh inning is where the offense flourished. Kirby McMullen put up an RBI single, followed by a walk to Colby Halter to bring Kris Armstrong in. Again, Young launched a ball into right field, plating two runs to tie the game at 5-5.

But the Gator defense faltered again.  With two out, there were two runners on second and third. Chase Estep made it to third after a single followed by a throwing error. Austin Schultz made it to second after a ball hit to third, followed by the same throwing error that got Estep to third. Schultz then stole second. John Rhodes would end the scoring a two-run single to center.