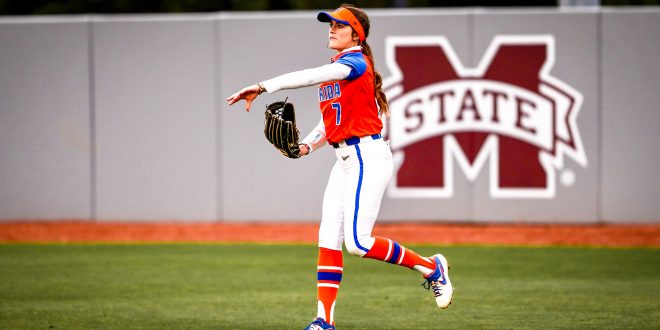 Avery Goelz throws the ball in the outfield in the Gators 1-0 win over Mississippi State. Photo Courtesy of GatorsSB Twitter.

No. 1 seed Florida, now (41-8) overall, will advance to the semifinal round of the SEC Softball Tournament at Rhoads Stadium.

Mississippi State took a 2-0 lead in the game at the top of the second inning, but the Gators didn’t waste any time to chomp back. After Jackie McKenna’s two-out double down the left-field line, Elizabeth Hightower buckled down and went on to pitch 2.1 scoreless frames.

The score for Mississippi State remained at 2-0 as the Gators began their come-up. Florida’s offense showed out in the bottom half of the 5th inning to take the lead 3-2 when Kendyl Lindaman hit a three-run homer allowing Charla Echols and Emily Wilkie to also score.

B5 | OPPO TACO‼️ Lindaman with a three-run homer gives the Gators the lead.

That’s the 69th of her career #GoGators

The energy of the game was raised after celebrating Lindman’s 69th career home run.

In the sixth, Echols also hit a homer off to the right-center field. This advanced Cheyenne Lindsey and Hannah Adams home putting the Gators up 6-2.

Echols turned in her 16th and eighth multi-hit games of the year.