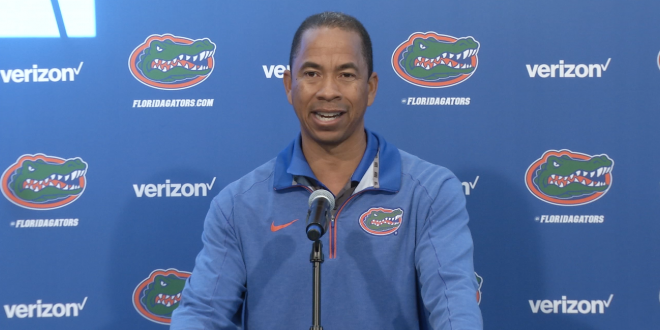 The Florida Gator Men’s Tennis Team is set to face Illinois on Monday night at the USTA National Campus. The first-seeded Gators will battle 16th-seeded Fighting Illini in the NCAA Tournament Round of 16 at 7 p.m.

This appearance marks the fifth-consecutive time the Gators have reached the Round of 16. This year, they earned their spot after defeating South Alabama 4-0 and South Florida 4-1. Illinois prevailed against Depaul and Notre Dame to secure their spot in Orlando.

The Fighting Illini won the Big Ten Tournament title and went into conference play 15-1, whereas Florida had an undefeated 12-0 regular-season record and was crowned SEC Champions. The last time these two teams went head to head was back in February 2020. The Gators ended up winning that matchup 7-0.

Florida currently has three players ranked in the top 20. These include Duarte Vale is fourth, Sam Riffice is sixth, and Andy Andrade is 18th. Florida also has two undefeated players in dual-match play: Josh Goodger and Blaise Bicknell.

Head coach Bryan Shelton spent the last nine seasons building up a winning program through hard work and dedication from his team.

“If anyone ever talked about Florida men’s tennis, they always talked about the talent,” Shelton said. “When I arrived here, the talent on our team was outstanding. We had to change the culture. It was just get up early, stay late … get to work. There’s going to be structure. We’re going to become a championship program. But it’s not going to just come from wanting it or wishing for it.”