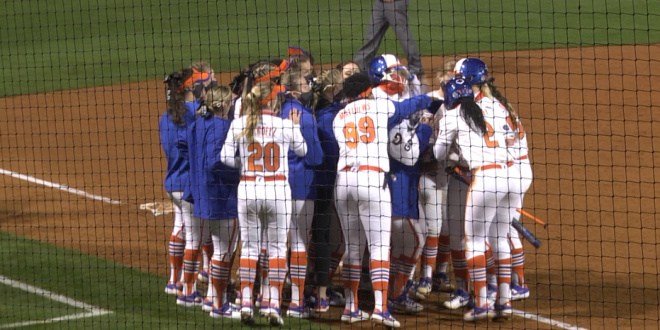 Florida’s pitcher, junior Elizabeth Hightower, threw her first career no-hitter to complete a three-game sweep of their NCAA Tournament home regional. Her counterpart, USF’s All-American Georgina Corrick, also has shown out for her team over the past few games. Corrick threw all four regional games for the Bulls, including a no-hitter against Baylor. The fourth-seeded Gators were able to clinch a spot in the NCAA Super Regionals.

Corrick came into the game having only yielded one run over three games. It was Hannah Adam’s walk-off RBI double from Friday night’s first-round meeting that challenged Corrick.

At the top of the fourth, Charla Echols and Kendyl Lindaman hit back-to-back singles. Soon after, catcher Julia Cottrill sent an RBI double to the back of the left field. This was the first run that Corrick gave up in 23 innings.

At the top of the seventh, the Gators got a leadoff single from Emily Wilkie.

Fortunately for the Gators, South Florida’s coach Ken Eriksen decided to pull Corrick after she had a spectacular weekend. Corrick had thrown 29 innings, gave up three runs, 18 hits, struck out 32 and walked only four.

With Corrick gone, Florida was able to increase their lead against the Bulls. With a 2-0 lead to start off the seventh inning, Jaimie Hoover hit an RBI groundout with the bases loaded before Sarah Longley earned herself a grand slam. This was her first homer of the season, and the impressive plays from the Gators took an immense amount of pressure off of Hightower.

The Florida on-field celebration after the game was well-deserved, and Hightower was right in the middle of it.

This win against USF makes for four straight regionals that Florida has gone unbeaten. Three of those have been games where the Gators have held their opponents to no-hitters.

The Gators (45-9) will host Georgia (32-21) this upcoming weekend in the Gainesville Super Regional. The Bulldogs previously defeated Duke with a final score of 10-9 in the Athens Regional on Sunday.