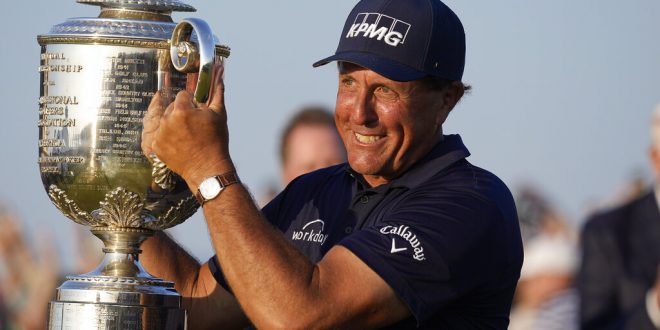 Golfer Phil Mickelson took home the Wanamaker Trophy after coming out on top of the 2021 PGA Championship.

At the age of 50, Mickelson is making history. He became the oldest major winner in golf history. Before this, Julius Boros held that title by winning the 1968 PGA Championships at the age of 48.

This was Mickelson’s sixth major win, second PGA title, and 45th PGA tour victory. The first of his 45 titles was when he was a junior at Arizona State. This also marked his first win since 2013.

Mickelson ranked 115th in the world prior to his title. However, he moved up to 30th after his major championship victory.

Mickelson ended the championship six under 282. His two biggest competitors were Louis Oosthuizen and Brooks Koepka, who ended in second place. He birdied five holes and bogeyed six, finishing one over. He entered the final round Sunday leading by only one over Koepka.

Pure choas erupted at hole 18 after hitting his way to victory on the green. He was immediately engulfed by fans.

It’s been an incredible day, and I’ve not let myself kind of think about the results until now, now that it’s over. I’ve tried to stay more in the present and at the shot at hand and not jump ahead and race. I’ve tried to shut my mind to a lot of stuff going around. I wasn’t watching TV. I wasn’t getting on my phone. I was just trying to quiet things down because I’ll get my thoughts racing and I really just tried to stay calm. It’s very exciting because I’ve had a few breakthroughs on being able to stay more present, be able to stay more focused, and physically, I’m striking it and playing as well as I ever have but I haven’t been able to see that clear picture.

I mean, I hope I’m still playing at 50. But to be able to come out and compete and actually win, that’s a whole another thing, so kudos to him. It was really cool to see.

Sara Dastgerdi is a current student at the University of Florida.
Previous MLB Preview: Rays, Marlins, Braves
Next Florida Gators Baseball Faces Kentucky in First Round of SEC Tournament