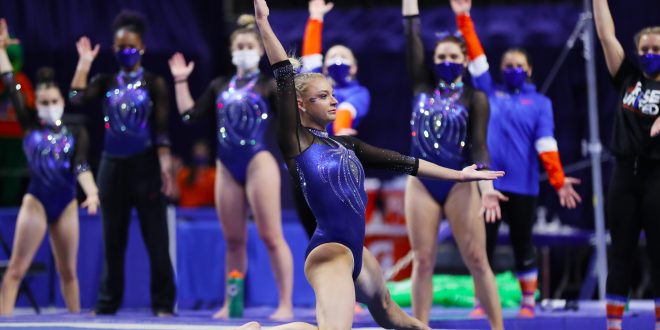 during the Gators' meet against the Georgia Bulldogs on Friday, January 15, 2021 at Exactech Arena at the Stephen C. O'Connell Center in Gainesville, FL / UAA Communications photo by Hannah White

Gator gymnast Alyssa Baumann still has the passion to compete another year. As the NCAA granted winter-sport athletes’ an extra year of eligibility due to the COVID-19 pandemic, she plans on taking advantage of the opportunity.

Four down, one more to go

To say the Florida gymnastics team has seen adversity throughout the 2021 season would be a vast understatement. Yet the team has continuously proven itself a national power.

Thanks to the NCAA’s decision to extend eligibility, expectations will surely rise for this talented team. Baumann is an eight-time All-American will some stellar stats on the beam and floor.

And she will not be alone in her return, as teammate Megan Skaggs will also be making a rebound in 2022. Skaggs released her statement a few weeks after nationals, which left many questions as to Baumann’s return.

With Baumann and Skaggs’ return, the Gators are widely anticipated for another run at a national title. Choosing to return for a fifth-year definitely was not an easy process for Baumann.

She sat down with media and credited the influx of talent next year as factor in her decision.

“We also have a lot of great talent coming in next year that I was really excited about. And I think that I can help them a lot and provide them some guidance and leadership,” she said.

She is looking forward to continuing her excellence and hopeful her return may result in more success for her team.

She considered whether she could physically and mentally handle taking on an extra year, but says she knows she could do it as long as she stays focused.

Looking ahead, she says she is honing in on how she can better her performance. She touched on working on minor things such as her dismount on top of the beam, but wants to bring a little more of a wow factor. One personal goal being to earn a perfect score of 10 in her final season.

Although, her return alongside Skaggs and the possible five incoming freshman talents should be promising enough.

Tori Edwards is a fourth-year Telecommunications student specializing in News with an outside concentration in Sport Management at the University of Florida. Tori works as an author and reporter for WRUF.com and is the voice of trendings on Wednesday mornings on ESPN 98.1 FM - 850 AM WRUF. You can reach Tori at victoriaedwards@ufl.edu.
@ToriEdwardsNews
Previous SEC Baseball’s Wednesday Round Up
Next SEC Well Represented in Super Regionals