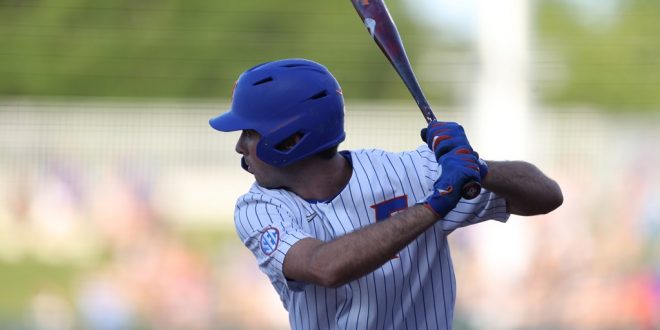 Florida Baseball finishes their SEC Tournament play at 3-1 after a scoreless matchup with Tennessee that ended at 4-0. The sixth-seeded Gators grabbed four hits against the Vols eight. The Vols will advance to play either Arkansas or Ole Miss in the championship,

Tennessee starter Camden Sewell pitched through six innings and grabbed six strikeouts during his time on the mound. Through the first three innings, the Gators were unable to make it to a base. Redmond Walsh entered in the seventh and struck out one hitter and was then relieved by Hunley to close out the game.

The Gators starter Brandon Sproat gave up three runs within a little less than four innings he saw on the mound. From the bullpen, Coach O’Sullivan brought in Christian Scott who threw three innings and only allowed one hit.

Florida seemed to have secured a top-16 national seed and will most likely host an NCAA Regional in Gainesville. More information will be known following the Sunday championship when the NCAA announces the NCAA Tournament regional assignments.

We’re going to our first SEC Tournament Championship game since 1995!

The final out ⬇️ pic.twitter.com/s1T42ZwhWj

Parker Welch is a Senior at the University of Florida majoring in Sports Media at the College of Journalism & Communications.
@parkerrwelch
Previous Tournament Edition: Gators Baseball Gets Rematch With Tennessee
Next Gators Baseball Hosts Gainesville Regional Tournament