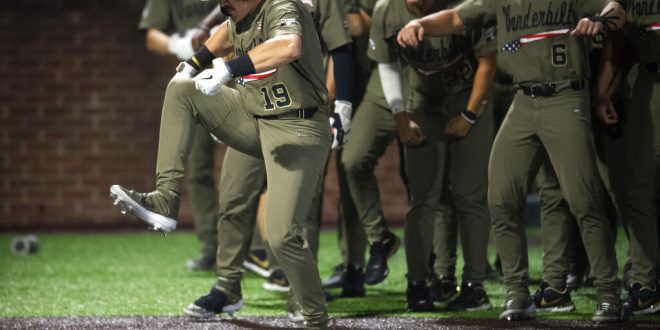 Vanderbilt's Troy LaNeve (19) stomps on home plate after his solo home run in the third inning against Georgia Tech in an NCAA Division I Baseball Regional at Hawkins Field, Sunday, June 6, 2021 in Nashville, Tenn. (George Walker IV/The Tennessean via AP)

The SEC Continues to fight its way through Regionals

Regional play in the College World Series wraps up today with four SEC teams in position to advance to the Super Regionals.

Tennessee and Vanderbilt have already secured their position in the Supers going undefeated in the Regional tournament. The SEC holds the potential to see play in five of the eight Super Regional games.

The Arkansas Razorbacks saw their first loss in the tournament after falling to Nebraska yesterday 5-3. The current SEC champions will have a chance for redemption against the Huskers tonight in Game 7 at 7 p.m.

A win will advance Arkansas to the Supers where they would match up with NC State.

The winner of this afternoon’s game will advance to see Arizona in the Super Regionals.

Vanderbilt saw no losses in Nashville this weekend. The Commodores secured victory at home after defeating Georgia Tech in the finals 14-11 in extra innings.

Vanderbilt advances to the Super Regionals to take on No. 13 ECU. The Pirates are also undefeated in the tournament thus far.

Mississippi State has no losses heading into the finals against Campbell today. A loss at noon will be followed by Game 7 at 4 p.m. where the winner will advance.

A win will take the Dogs to the Super Regionals to match up against Norte Dame.

LSU fought their way back in the elimination bracket to advance to the regional finals. The Tigers beat Oregon 4-1 in Game 6.

Game 7 between the Tigers and the Ducks will begin at 10 p.m. eastern. The winner will advance to take on Tennessee in the Supers.

For the first time in 16 Years Tennessee is headed to a Super Regional! #RoadToOmaha pic.twitter.com/J7ZM4HkIAk

The Volunteers were another undefeated host. Tennessee won 9-8 against Wright State in the opening round of the tournament. They then went on to play Liberty in the semi-finals and again in the finals where they defeated the Eagles 3-1.

Tennessee advances to the Super Regionals where they will take on the winner of LSU and Oregon.

The Super Regional games will begin June 11 and wrapping up on June 14.

The Eight victorious teams will head to Omaha on June 19 to battle their way to the final series of the post-season.