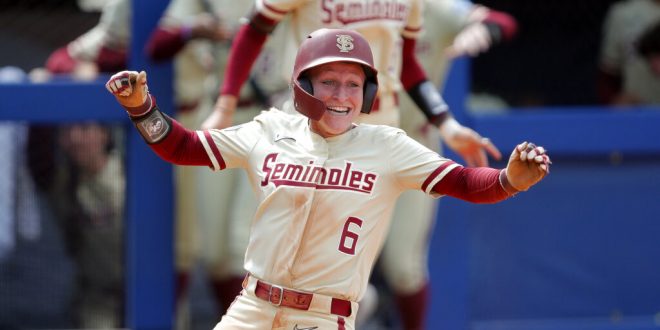 WCWS: FSU vs Oklahoma in the Tournament Final

The Women’s College World Series Finals is a best-of-3 series featuring top ranked Oklahoma against the number 10 team in the country, the Florida State Seminoles. Game 1 is set for Tuesday at 7:30 p.m. Game 2 is scheduled for Wednesday at 7 p.m. Game 3 (If necessary) is on the slate for 3 p.m. Thursday.

The Seminoles are expected to go with Kathryn Sandercock to start in game 1 of the series but Danielle Watson and Caylan Arnold should see time as the series progresses. Oklahoma boasts three options of their own in Giselle Juarez, Shannon Saile and Nicole May. Juarez is expected to get the game 1 start.

Florida State faces a high powered Oklahoma offense. The Sooners have put up double digit runs this 31 times this year and only lost two regular season games on the season.

In order for Florida State to win its second Women’s College World Series in three seasons, they will need production at the plate as nearly every player is batting under .300 on the year. Oklahoma has shown over the course of the season the ability to score runs at an incredible volume.

Oklahoma is looking to redeem themselves with a victory this time around as they fell short to UCLA in the 2019 Women’s College World Series on a walk-off.

FSU defeated Alabama and a red-hot Montana Fouts to get here and Oklahoma got revenge on James Madison University after being sent to the losers bracket in the first round of the Women’s College World Series.