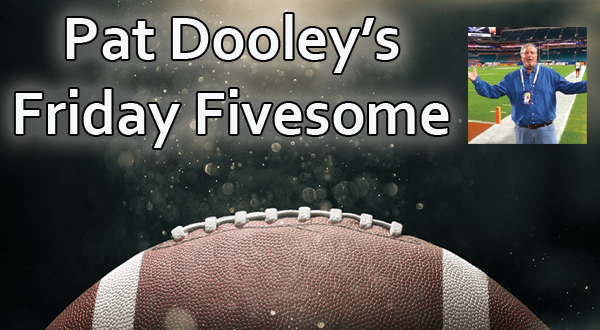 The “Friday Fivesome” comes at you for the second installment of football only opinions, which means we are that much closer to football season. Heck, we can even see SEC Media Days from here.

1.Obviously, the plans for a new playoff system took center stage in the college football world and it appears the tracks have been greased to get this done. The 12-team playoff plan is not without its flaws and I’m curious to see if any of them are addressed or, instead, they are ignored until they become a huge issue. Because that’s the way they like to do things. Yes, there is a chance that two teams could play a 17-game season. There is almost a lock that two teams will at least play 16-game seasons. It’s almost as if the Five Families and their capos have decided that if the players want rights, they’re going to have to pay for them. While this looks on the surface like a money grab, it’s really about college football’s declining attendance and lack of intrigue when it comes to the teams involved in the current playoff system. They want more teams to be involved and it certainly will not happen organically. It has to be forced and the football-loving public is going to benefit greatly.

2. So, two things that do stand out about the plan, and remember that there are still meetings and a vote by the member institutions that have to take place. But, it’s happening. With this plan, the No. 1 team in the land does not get a home game and instead receives a bye (as do 2-through-4). If the top seeds get all the way to the final, fans would be asked to travel for three straight weeks and pay big bucks. Thing about the possibility of the No. 9 seed traveling four straight weekends. I can see this being a problem, but it’s not about ticket sales as much as it is TV money. The other thing is that Notre Dame can win every game and not be a No. 1 seed because it cannot win a conference title. I wonder if this will serve as a push to get the Irish to officially join the ACC.

3. Anyway, it just seems so funny that years ago we were told by the commissioners and poor Bill Hancock that we would never have a playoff and the BCS was working and then we had a four-team playoff and now we’re going to have a 12-team playoff. Just think, if this had happened last year, Iowa State would have played at Florida in the first round with the winner taking on Clemson in a bowl game. Now, I’m getting fired up.

4. I can tell you that not many people would be projecting Florida to be in the top 12 this season. Some of it is the schedule (Florida is an early underdog in its three big games) and some of it is that Florida lost so much offensive talent. I saw one projection that had Florida’s over/under for conference wins at 5.5. Remember before you become indignant that Mullen has only won more than five SEC games three times in his 12 years as a head coach. Also remember that two of those times were the last two years. That’s a lot to remember but I kind of like that people are ready to dismiss this team during talking season. It could light a real fire under those players.

5. Last week, I talked about which programs are truly relevant in college football right now and that number will increase greatly when we get to the 12-team playoff. Everyone has a different opinion about what relevance means. In the SEC, it would be Alabama, Texas A&M, Georgia, Florida and LSU. The other national teams would be Oklahoma, Ohio State, Notre Dame, Clemson, maybe Iowa State, possibly Miami and Cincinnati and that’s as far as I would go. Of course, a lot of that could change.