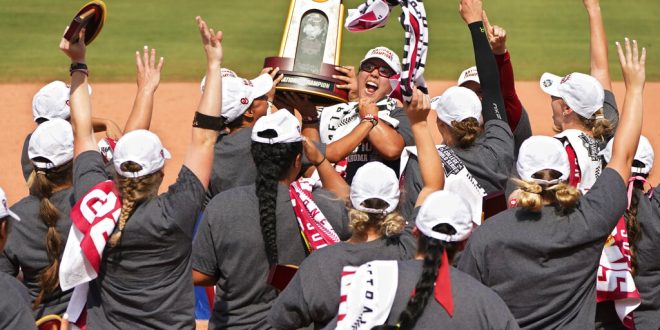 In the end, the heavy weight came in and won it all. The Oklahoma Sooners took games two and three against the Florida State Seminoles to win the Women’s College World Series.

This championship for the sooners caps off a season of shear dominance from start to finish. And the sentence is no understatement. After all, they started off 33-0 and finished with a still-insane 56-4 record.

Florida State was no pushover themselves, finishing the season 49-13-1. Certainly, they were not the favorites to make it this far, Yet they turned heads, especially after beating Oklahoma State, back-to-back games against Alabama and the first game of the finals. This was all in four-consecutive games. Credit where credit is due.

The Noles just couldn’t get that second win against the team that had barely lost to anyone just one time all year.

The Final Game of the Season

Oklahoma set the stage early, when designated player Jocelyn Alo blasted a solo shot to left field, giving her team a lead they’d never relinquish. In the following inning, center fielder Jayda Coleman homered to left as well, putting the Sooners up 2-0. Coleman pointed her right index finger to the heavens, as she rounded the bases.

Florida State wouldn’t go too quietly. In the top of the third, right fielder Kalei Harding led off the inning with a walk and was moved over to second on a Kaley Mudge groundout. Sydney Sherril doubled to bring Harding home to cut the score in half. Little did Florida State know, this would be the final sun scored this season. Sooners pitcher Giselle Juarez retired the next 11 Noles consecutively. If not for a four-pitch walk with two outs, it could have been a perfect four final innings to take home the crown. We’ll get to the final out in a moment.

Meanwhile, Oklahoma scored three more runs in the bottom of the third to put the game away.

With that two-out walk on first, Juarez got Devyn Flaherty to pop up back to Juarez herself to win it. Juarez threw down her glove as she ran to embrace catcher Kinzie Hansen.

This title is Oklahoma’s fourth title in the last five tournaments and their second straight. Keep in mind, there was no tournament last year, so this back-to-back feat dates back to 2019. They are also the first back-to-back champs since 2016/2017, which was accomplished by, well, Oklahoma.

Harrison is a sports coordinator at ESPN 98.1 FM/850 AM WRUF. He served as a beat writer for Florida Gators football for the 2019 and 2020 seasons. He also contributes to WRUF's Gainesville Sports Center segments and makes appearances on the Clash on Harp on Sports. Harrison has been a content writer for WRUF since January 2019 as well.
@HarrisonSmaj
Previous Arians pleased as Buccaneers end minicamp
Next Pat Dooley’s Friday Fivesome June 11th