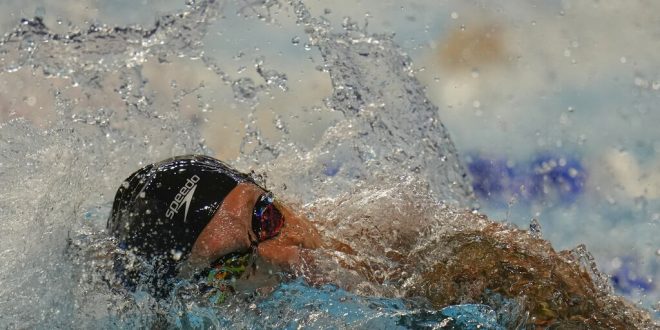 Many more, along with track athletes, continue competing in the Olympic Trials.

Making a Splash towards Tokyo

In a series of firsts, Kieran Smith clinched the first Gator bid in the pool with a time of 3:44.86 in the 400 freestyle on Sunday. He shaved three seconds off his personal best to win the event and make his Olympic debut.

On Thursday, current Gator Bobby Finke punched his first-ever bid to the Olympics with a romp in the 800 free The.800 free also makes its rookie appearance as an Olympic event in Tokyo.

“I am just so thankful for my friends, family, and coaches here and back home,” said Finke.

“The Gators had an incredible night. Bobby Finke had a fantastic 800 Free, winning the Final with a 7:48.22 and punching his ticket to Tokyo. He swam that race perfectly. I am extremely proud of him. He trains with purpose and it shows.  Clark Beach represented the Gators in the 200 Back Semi-Final and just missed qualifying for the Finals. Clark is very talented and gave this race his best effort.  Kieran finished the night with a tenacious 200 IM, securing a third-place finish overall. This swim places him in the Finals tomorrow evening. Again, Kieran is a student of the sport as Bobby is and will make a determined effort tomorrow night. This I know for sure! We are humbled to represent the Gators and will do our best to make the Gator Nation proud.”

In the Women’s 100 free, Natalie Hinds swam to a tie for first with a new personal best of 53.55 on Thursday. Hinds advanced to the finals on Friday night.

Former Gator Ryan Lochte made a big name for himself in four prior Olympics. He now faces great, though not insurmountable, odds to reach his fifth. Lochte finished sixth in the 200 IM with a time of 1:58.65 to advance to the finals. Lochte joins Smith, who finished third with a time of 1:57.61.

Full swim results, including those of the Beach brothers, can be seen here.

Reigning world champion Grant Holloway competes in the 110-meter-hurdles Friday, June 25. The semifinals and finals take place the next day.

Furthermore, Will Claye, who won two silvers in Rio, flies in the triple jump this Saturday. Claye will meet American long jump champion Marquis Dendy on June 25 and 27. Sophomore Claire Bryant soars in the long jump on the same days.

Moreover, Jeff Demps, former Olympian and Gator running back compete in the 100 meters beginning Saturday. Grace Stark also pops out of the blocks on Saturday, in the 100-meter-hurdles.

Florida athletes will have a familiar face in Tokyo through head coach Mike Holloway, who will lead Team USA.

The Tokyo 2020 Olympics, featuring Gators across many sports like swimming and track and field, takes place July 23 to Aug. 8.