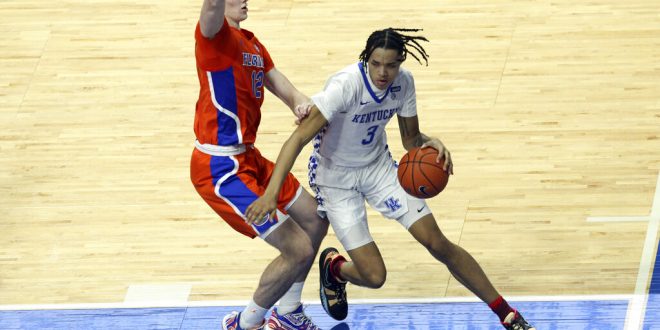 Kentucky's B.J. Boston (3) looks for an opening against Florida's Colin Castleton during the second half of an NCAA college basketball game in Lexington, Ky., Saturday, Feb. 27, 2021. (AP Photo/James Crisp)

Florida Gators junior center Colin Castleton has stayed productive throughout the offseason as he has been getting a taste of the NBA Draft process. He used the time to reflect on whether he should begin his journey at the next level. But after months of mulling over his decision, the Florida big man announced via social media he is withdrawing from the 2021 NBA draft and will return for the 2021-22 season.

Speculation of his return has surrounded the Florida Gators program for the past few months. During his time testing the professional waters, he hired an NCAA-certified agent to maintain his eligibility. Throughout the process, he continued working out with NBA teams and gaining feedback on where he could improve.

Prior to his announcement, he had individual workouts with Memphis, Milwaukee and Minnesota. Although his decision came as no surprise to many, the news was a major relief for head coach Mike White and staff.

One last ride for Castleton

The 6-foot-11, 231-pounder transfer came to Gainesville in 2020 from Michigan and immediately made his impact at Florida. His stellar stats speak to just how strong of a defensive threat he is.

Colin Castleton made this bucket with FOUR LSU players around him. pic.twitter.com/wQoWuoGIEg

He started 21 of Florida’s 24 games, averaging 12.4 points, 6.4 rebounds and 2.3 blocks per game. After leading the team in rebounding last season, he earned All-SEC second-team honors. He was also a two-time select as SEC Player of the Week.

Although Castleton has grown to be a major part of Florida’s identity, he will be missing some of his key counterparts on the court in the upcoming season.

Six players from the 2020 roster have departed the Florida program. Two of which include guards Tre Mann and Scottie Lewis who declared to enter the 2021 NBA Draft.

As six vacancies remain on the Gators roster, coach White will have a need for more big men on the court. But White looks to address those holes with additions from the NCAA transfer portal, already plucking up four players.

Among the four transfers, the Gators picked up power forward CJ Felder and anticipate him making an immediate impression on the defense. The 6-foot-7, 230-pound transfer averaged 9.7 points, 5.9 rebounds and 0.9 assists last season. Combined with Castleton, Florida should have a shutdown defense in the frontcourt.

The Gators also has five returning scholarship players, who include Tyree Appleby, Anthony Duruji, Jason Jitoboh, Niels Lane and Samson Ruzhentsev. Alongside the influx of talent from the transfer portal, Florida may be one of the oldest teams this upcoming season.

Although the Gators may be one of the most experienced programs this upcoming season, only time will tell if they can outperform their 2020-21 group.

Previous Euro 2020 semifinals begin today
Next Back to Back: The Lightning Win the Stanley Cup Again