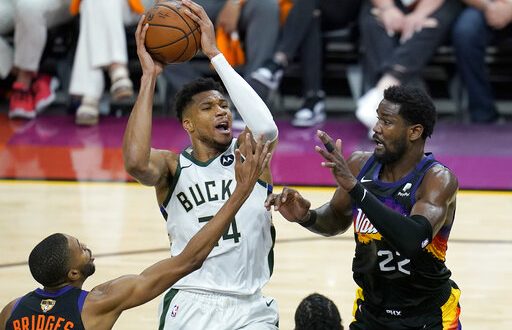 No team in NBA history has won after going down 0-3 in a Series. 0-127 all time. Only 15 teams have ever won a best of seven series after losing the first two games away. Six percent. In fact, in the NBA finals, only four teams have come back from 0-2 the last being the 2016 Cleveland Cavaliers.

The Suns have convincingly taken a 2-0 lead over the Milwaukee Bucks with a 118-108 win Thursday night. The 8-0 “bubble” team looked lights out the last two games behind the arc. Pheonix made 20 three-pointers second all-time in a finals game. Team basketball has been the most important part of the Sun’s rally to a 2-0 lead and their playstyle has encompassed their leader. Chris Paul.

Paul has transformed this team from the cusp to potential NBA champions. Chris Paul, Devin Booker, Mikal Bridges, and Deandre Ayton combined for 91 points in the victory. After a game two victory, Mikal Bridges had choice words on the mindset of taking Milwaukee on the road.

If the Suns win their game three, there is a very good chance they will win their first title in franchise history.

If the Bucks are going to have any chance to come back in this series it’s going to take memorable, all-time performances. Giannis hasn’t been the issue. Antetokounmpo dropped an all-time performance in game 2 with 42 points and 12 rebounds. It’s been the supporting cast that has letdown the former 2-time MVP throughout the last two games. When Giannis isn’t on the floor games haven’t looked close either. With Giannis, the Bucks are outscoring the Phoenix Suns by a +4 in two games, without him though it’s -27. Those numbers are comparable to Lebron’s 2017 historic performances against two former MVPs, a shooting specialist superstar, and Draymond Green. After all modern-day basketball can’t be won by one superstar. The real question is where is Antetokounmpo’s help?

Giannis Antetokounmpo's 20 third-quarter points tonight are the most in an NBA Finals quarter since Michael Jordan on June 16, 1993 (22 points in 2Q). pic.twitter.com/sL1SdJLjGe

If Giannis is Batman and Khris Middleton Robin then Jrue Holiday is Alfred. An integral part of the dark knight’s team. The former All-Star has combined to shoot 11-35 over two games, averaging 13.5 points, 8.0 assists, and 6.0 rebounds per game. A far cry from his efficient 17 point average in the regular season. If the Bucks want to turn their series around both Holiday and Middleton need to maintain strong levels of the play starting in game three. Giannis still has faith the Bucks will turn it around.

Everything rides in Milwaukee

Game three is set to be the most pivotal matchup in the entire series. Tip-off begins at 8:00 pm Sunday night.

Ethan Sanabria is a second-year telecommunications student on the digital film and television production track at the University of Florida's College of Journalism and Communications. He has previously worked as a broadcaster for the Florida Flight basketball team and currently helps the production of WUFT news facebook lives. You can reach Ethan on any of his social media or at Ethansanabria@ufl.edu.
@ethansanabria
Previous O’Sullivan enjoying time as pitching coach
Next Pat Dooley’s Friday Fivesome July 9