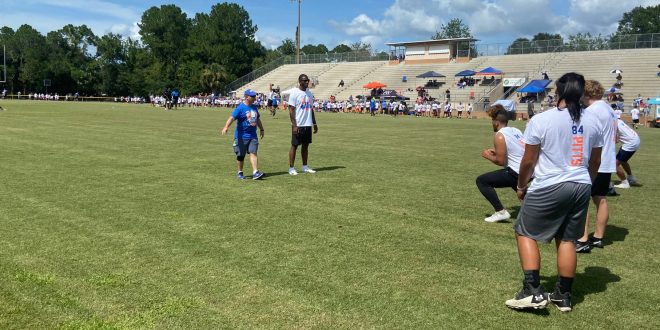 Former Gators tight end Kyle Pitts is back in Gainesville. This time, he took to the gridiron at Citizens Field to hold a football camp for kids.

When asked, Pitts said it was good to be back in Gainesville. He joked about how he forgot how hot the city can get in the summer. Along with the camp, Pitts has taken some time to visit friends and make the most of his stay.

Now, the fun continues in the form of a youth football camp. Pitts sees it as a way to give back, especially since he once went to a camp like the one happening this week.

Pitts also said it is special to hold the camp in Gainesville. He said the city showed him a lot of support during his time at Florida, and it makes giving back to the community important to him.

Kyle Pitts played for the Florida Gators for three seasons from 2018 to 2020. While he didn’t see much action in his first year, he made noise his sophomore and junior years. In 21 games in those two seasons, the Gator tight end received 1,419 yards and 17 touchdown receptions. In his senior season, he averaged nearly 18 yards per reception.

Along with quarterback Kyle Trask, he became part of the notable “Kyle to Kyle” duo that helped lead the Gators to two New Years Six Bowl appearances.

Pitts turned every head in Ben Hill Griffin Stadium and around the football world. The result: being picked fourth-overall in the NFL Draft by the Atlanta Falcons. Pitts became the highest drafted tight end in NFL history.

Harrison is a sports coordinator at ESPN 98.1 FM/850 AM WRUF. He served as a beat writer for Florida Gators football for the 2019 and 2020 seasons. He also contributes to WRUF's Gainesville Sports Center segments and makes appearances on the Clash on Harp on Sports. Harrison has been a content writer for WRUF since January 2019 as well.
@HarrisonSmaj
Previous MLB All Star Game preview
Next Rob Manfred on the State of Major League Baseball