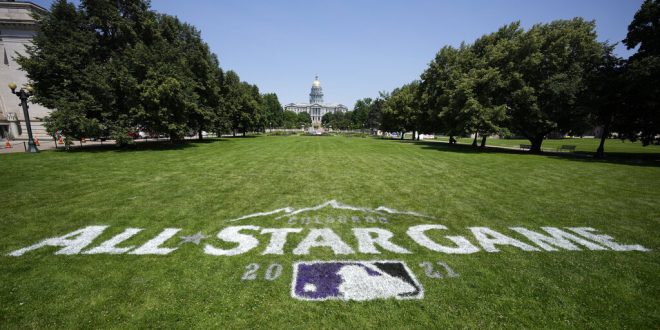 A logo is painted on the lawn outside the McNichols Civic Center Building as part of festivities leading up to the playing of the Major League Baseball All Star Game on Saturday, July 10, 2021, in Denver. A traveling exhibit of art from the Negro Leagues Baseball Museum in Kansas City, Mo., being staged at McNichols is one of many events held on All Star Game weekend in the Mile High City. (AP Photo/David Zalubowski)

With the onset of COVID-19, seven-inning doubleheaders and a man on second at the start of every inning after the 9th were put into place. Now, a year and a half later, Manfred was asked about the future of these changes: “It was a covid-related change. I don’t think that seven-inning doubleheaders are going to be a part of our future going forward.” Likewise, he had a similar view on a runner on second at the start of extras but remained brief.

Manfred announced that the MLB will be donating up to $150 million to the Players Alliance over the next 10 years to increase black representation and more equitable systems across the sport. “Major League Baseball is thrilled to expand our commitment to the Players Alliance, which will include joint efforts to strengthen our sport’s engagement with Black communities,” Manfred went on to say. Here’s the commissioner on the importance of diversity:

The CBA is set to expire on December 1st as many questions hover such as rule changes. The agreement will be negotiated between the Major League Player’s Association with head Tony Clark and the MLB led by Manfred. There has been growing tension between the owners and players due to doubt from the players about the intentions of the owners. On the other hand, the owners have been concerned about disinterest from the fans and are looking for rule changes to engage more people.

The second half of the 2021 MLB season is set to resume tomorrow night with the Yankees and Redsox at 7:00 PM.