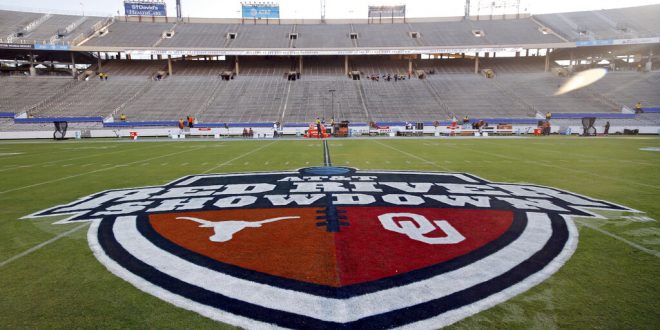 FILE - In this Oct. 10, 2020, file photo, The Red River Showdown logo is displayed on the field of the Cotton Bowl, prior to an NCAA college football game between the University of Texas and Oklahoma, in Dallas. Texas and Oklahoma made a request Tuesday, July 27, 2021, to join the Southeastern Conference — in 2025 —- with SEC Commissioner Greg Sankey saying the league would consider it in the “near future.” (AP Photo/Michael Ainsworth, File)

He described it as a “wonderful deal for Texas” because they don’t win too much in the SEC as it is. Basically, Texas has nothing to lose. On the other hand, Spurrier did not expect Oklahoma to make this move.

“I’m surprised Oklahoma would give up their conference to jump into the SEC.”

Referring to Oklahoma’s five-straight BIG 12 championships, Spurrier said that he didn’t like the move for the Sooners. Oklahoma has also won nine out of the last 11 Big 12 championships and will likely not continue this trend if they join the SEC.

“This is really good for Texas, but for Oklahoma, I’m not so sure.”

When asked if this was good for the sport, Spurrier was not so optimistic.

“I don’t think so. I hope it doesn’t hurt teams like Kansas, Kansas State, Iowa State, and other teams in the BIG 12.”

Regarding rivalries, Spurrier is sure that conferences changes would shake up the traditional rivalries. He said it will “reshape everything around.”

On the topic of rivalries, he also touched on his relationship with Bobby Bowden after the ex-FSU football coach was recently diagnosed with a terminal illness. He spoke highly of some of the guys Bowden has coached over the years.

“He had some first-class guys. Charlie Ward was involved in habitat for humanity and built thousands of houses for people.”

Lastly, he mentioned a piece of history that is now reaching its 25th year anniversary. Although this year would be the 25th anniversary of the ’96 championship team, there was a lot of pride in their ’95 season as well.

“The ’95 team is the only team in school history that went undefeated and won the SEC.”

Whether or not Oklahoma and Texas will join the SEC is still up in the air, but there will certainly be effects if the proposal is approved, as referenced by Steve Spurrier.

At the annual Jumpman Invitational, the Florida men’s basketball team (7 -5) lost to the …