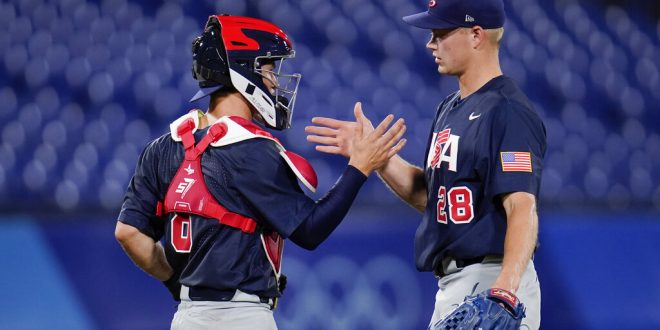 We are now in the heat of the 2020 Tokyo Olympics, and it’s baseball’s turn to return to the world stage. For the first time since 2008, baseball is an Olympic sport. Team USA also returns to Olympic baseball in a big way.

In their first game since 2008, USA defeated Israel by a score of 8-1. Former Gators catcher Mark Kolozsvary started at catcher for Team USA, batting eighth in the lineup. He went 0-3 at the plate, but he did reach base via the walk. Both teams are in Group B along with South Korea, which has already beaten Israel in extra innings and upset the Dominican Republic.

The current standings for Group B:

Team USA currently leads the world in total medals won at the Olympics with 41. They sit at first for silver medals (16) and are tied for bronze medals (11). However, they sit in third for total gold medals won with 14. China and Japan both lead the USA with 18 and 17 gold medals respectively.

The American with the most medals is swimmer Katie Ledecky with three medals, including one gold and two silver. Swimmer and former Gator Caeleb Dressel and gymnast Suni Lee both are second with two medals each. Dressel has two gold medals, while Lee has a gold and a silver medal.

The athlete with the most medals overall is swimmer Emma McKeon. She has won four medals, including two gold and two bronze medals.

Harrison is a sports coordinator at ESPN 98.1 FM/850 AM WRUF. He served as a beat writer for Florida Gators football for the 2019 and 2020 seasons. He also contributes to WRUF's Gainesville Sports Center segments and makes appearances on the Clash on Harp on Sports. Harrison has been a content writer for WRUF since January 2019 as well.
@HarrisonSmaj
Previous Rae Finley ready to take over Gators women’s hoops
Next Pat Dooley’s Friday Fivesome July 30