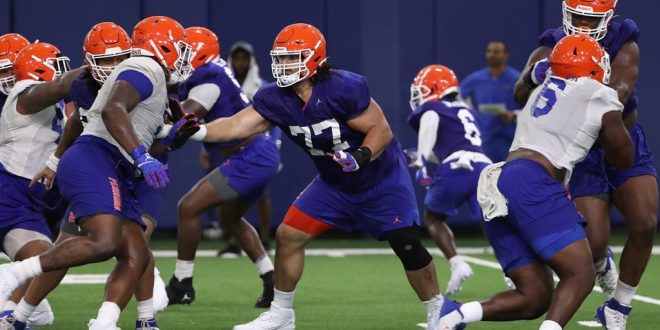 For the better part of the 2020 NCAA football season, the Florida Gators were known for their fierce offensive attack. Behind All-American talents like Kyle Pitts, Kyle Trask and Kadarius Toney, the Gators were scaring defenses all throughout the SEC. However, as stars come and go in college football, so did these future NFL draft picks. But this hasn’t stopped the 2021 Gators from improving during their fall training camp.

As Florida’s rushing attack ranked 11th in the SEC in total rushing yards last season, the Gators strive to find a more consistent backfield. The orange and blue have been working a lot on camaraderie as a unit coming into this next season. Malik Davis stressed how the running back room has flourished into a “family” as of late.

Chemistry in a crowded position room is necessary to succeed in a Power Five program. With Davis illustrating incredible levels of loyalty and brotherhood, Gator fans are hopeful this positional bond translates to the field. Ranked 12th in rushing yards per game last year in the SEC, the Gators look to find the answer to their running game problems this offseason.

There is a lot of pressure on the Gators’ offensive line this year. Not only is there a new quarterback at the center, but also many adjustments being made at the line. Junior lineman Ethan White spoke to media about the offensive front. White stressed that he and the rest of the team’s offensive linemen are looking to play more position-less football.

“I’m still not trying to be too locked in at one spot, I like to have position flexibility,” White adds.

With Emory Jones mobility, offensive linemen will have to be comfortable playing all areas of the line. Additionally, for the Gators to see any real strides in the running game, the offensive line has to be a cohesive unit.

Just two weeks away from kickoff in the Swamp, the Gators have their work cut out for them. With confidence in the running back room and some revamped offensive line work, the Gators look forward to their first matchup of the season.