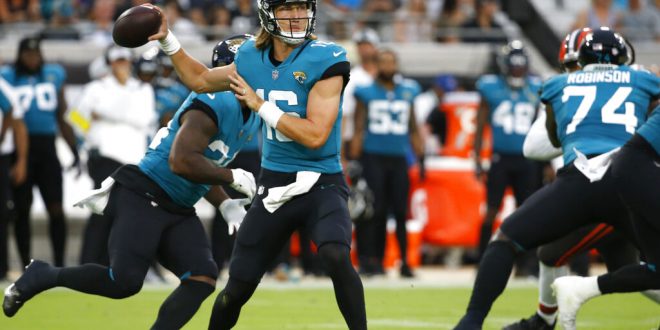 Jacksonville Jaguars quarterback Trevor Lawrence throws a pass during the first half of an NFL preseason football game against the Cleveland Browns, Saturday, Aug. 14, 2021, in Jacksonville, Fla. (AP Photo/Stephen B. Morton)

On Monday night, the Jacksonville Jaguars travel to New Orleans for a primetime matchup against the Saints to conclude week two of the NFL preseason. In the middle of a quarterback competition, first-year head coach Urban Meyer and his team have a lot of work to do before the season starts on Sept. 12.

After beginning the 2021 preseason with a 23-13 loss to the Browns, the Jaguars look to avenge their loss in the newly-named Caesar’s Superdome. Quarterback Trevor Lawrence is expected to start tonight. He has plenty of experience playing in New Orleans, which is helping him prepare for the rowdy atmosphere.

Heading into the game, Jacksonville made a significant roster move by placing linebacker Josh Allen on the reserve/COVID-19 list on Monday morning. Outside of Allen, there are no new significant injuries.

As far as the matchup is concerned, the Saints are currently favored to win with the line at -4.0, and the over/under is listed at 39.5 points. Live coverage for the game starts at 8:00 p.m. on ESPN.

After drafting Lawrence with the first overall pick in the 2021 NFL Draft, Meyer opened up a quarterback competition between Lawrence and 2020 starter Gardner Minshew. So far, Lawrence has impressed with his performance. In the loss to the Browns, Lawrence completed six passes on nine attempts for 71 yards, including a 35-yard completion to Marvin Jones.

On the other hand, Lawrence did make some rookie mistakes, taking two sacks and fumbling once. However, these are not a cause for concern yet. Adding to Lawrence, Minshew completed four passes on eight attempts for 47 yards and an interception. Although out-performing Minshew in the game, Meyer stated that Lawrence has not won the job yet. If he does, he will be given full reps with the starters.

Coming into his first season, Lawrence states he wants as many reps as he can as a young quarterback.

Adding to his statement, Lawrence is unbothered by the competition for the starting position.

Meyer has not publicly named a starter for the 2021 season, but early signs point to Lawrence winning the job.

The Jaguars conclude the 2021 preseason against the Dallas Cowboys on Aug. 29. To open the 2021 season, they stay in Texas for a matchup against Houston on Sept. 12.