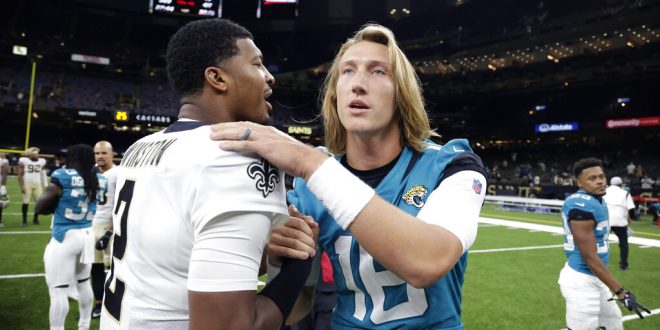 The New Orleans Saints beat the Jacksonville Jaguars 23-21 on Monday Night Football to finish off week 2 of the NFL preseason.

Jameis Winston made big plays in his first NFL start since 2019 with touchdown passes of 43 and 29 yards to second-year pro Marquez Callaway. Winston looks to solidify himself as the Saints starting quarterback as New Orleans begins the post-Drew Brees era. He finished with 123 yards on 9 of 10 passes to go along with those two touchdowns.

One of Winston’s faults in the past was his decision making. In 2019, he threw for over 5,000 yards and 33 touchdowns but also had a league-high 30 interceptions. Last night, Winston had his arm strength on full display and continued to make good decisions with the football.

In addition, fifth-year pro Taysom Hill continued to see work under center. He finished 11/20 with 138 yards and a touchdown. Despite the strong play from Hill, Winston has made his case to be QB1 for New Orleans in their season opener against the Green Bay Packers. Head Coach Sean Payton will have just one more preseason game to make a decision.

The score of the game is not indicative of how the starting units played; New Orleans had a 17-3 lead going into halftime. The Jaguars scored the majority of their points in the fourth quarter against New Orleans’ back-ups and third stringers. Once again, Jacksonville struggled to move the ball and get their offense going.

No. 1 pick Trevor Lawrence finished 14/23 with 113 yards while playing the entire first half. He led one scoring driving that resulted in a field goal.

Head Coach Urban Meyer says the offense is “not balanced right now” amid their struggles. The Jaguars rushed the ball 20 times for a total of just 45 yards. In addition, No. 25 pick and college teammate of Lawrence, Travis Etienne, left the game with a sprained foot. With just one more exhibition game until the regular season, Meyer says he must get the offense playing better.

After giving up four sacks in their preseason opener, Meyer turned to three backups to start on the offensive line. Meyer says he saw improvement from Lawrence and the rest of the o-line. He adds that getting some of his weapons back including D.J. Chark and the addition of Phillip Dorsett will also help the team.

2020 No. 9 overall pick C.J. Henderson continues to see work with the starters as he played the entire first half. Despite his struggles as a rookie, Jacksonville is hoping for a big second year out of the cornerback.

As a reminder, with the NFL regular season now 17 games, teams will play their third and final preseason game this week. The Saints will host the Arizona Cardinals while the Jaguars will face the Dallas Cowboys on the road. The regular season will kickoff on Sept. 9 with the Tampa Bay Buccaneers hosting the Cowboys.