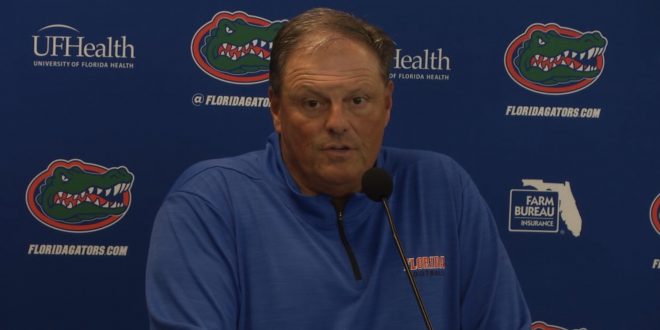 In 2020, Florida was No. 83 nationally in total defense, experiencing a major drop off from 2019’s mark of No. 7. Being that, Gators fans are hungry to see an improved unit following a full offseason of spring and fall camp. Accordingly, with returning upperclassmen and another big offseason in the transfer portal, the defense looks to take a major step forward in 2021. Grantham discussed how depth could aid his unit during Monday’s media availability.

Kaiir Elam is the crown jewel of the Gators defense. The cornerback is a Second-Team Preseason All-American. The highly touted 2022 NFL Draft prospect is hoping for another explosive season while leading the secondary. However, the departure of Marco Wilson and the injury to Jaydon Hill, the opposing spot to Elam has come into question. Yet, even with inexperience, Grantham has hope for this units potential in 2021 headlined by Avery Helm and blue-chip prospect Jason Marshall Jr.

Redshirt freshman Avery Helm will start opposite Elam. However, Grantham expects Marshall Jr. and recent transfer Elijah Blades to get into the rotation at corner. But, the STAR position has always played a crucial aspect of Florida’s scheme.

With a hole at the position, sophomore Tre’Vez Johnson gets the start. Florida’s defensive coordinator expects big things from the sophomore in 2021.

Deep In The Trenches

The defensive line will look to anchor the defense. For the Gators, Florida returns both edge rushers, Zach Carter and Brenton Cox Jr. from 2020. Yet, with the departure of TJ Slaton and Kyree Campbell, Grantham once again looked to the transfer portal to bolster this units depth. He talks what to expect from this unit below.

Yet again, Florida took players from the transfer portal in 2021. Headlining the additions are Penn State transfer Antonio Valentino and Auburn transfer Daquon Newkirk. Both arrived on campus in the spring. However, the Gator’s are still adding through the portal as recently as Monday. Even so, Auburn transfer Tyron Truesdell joined the team and are expected to play in Saturday’s FAU game. The move will add additional depth to the line. They join other transfers and former blue-chip prospect Gervon Dexter in a crowded defensive tackle rotation. Grantham discusses this addition below.

For 2021, this unit expects to fuel Grantham’s defense. Although, with a crowded line room, defensive line coach David Turner should see his unit exceed expectations. Grantham discusses these expectations below, hoping to see his team play fast, physical and aggressive.

With the offseason over, Grantham now looks ahead to Saturday’s home opener v. FAU. While scouting the Owls, Florida’s defensive play caller noticed many familiar faces. Notably, the Owls head coach, Willie Taggart, faced Grantham twice during his tenure as head coach of FSU. Yet, the most familiar face came at the quarterback position. For FAU, Miami transfer N’Kosi Perry is the starter for the Owls. Perry is someone Florida once prepared for before the 2019 week zero Miami game. Grantham discusses what to expect from the Owls’ starter below.

For Florida, Saturday’s game is a crucial opportunity to see defensive improvement. Although, time will tell the unit’s success in 2021, but if anything will propel the defense back to 2019 level success, it will be depth.

The Florida Gators open the 2021 football season at home against the Florida Atlantic Owls Saturday at 7:30 pm. This is the first meeting between the schools since Florida’s 2015 dramatic 20-14 overtime victory.

Sam Petosa is a Journalism major pursuing a Specialization in Sports and Media at UF. The South Florida native produces daily shows for WRUF, including "Sport Scene with Steve Russell, and "The Tailgate." In addition, Sam provides weekly sports updates for WUFT News and radio Sportscenter's for WRUF radio. Sam has been a writer at ESPN Gainesville since January 2020.
@sampetosa5
Previous Rays Remain Hot, Take Down the Red Sox
Next Florida Gators Participate in the 2021 Tennis US Open