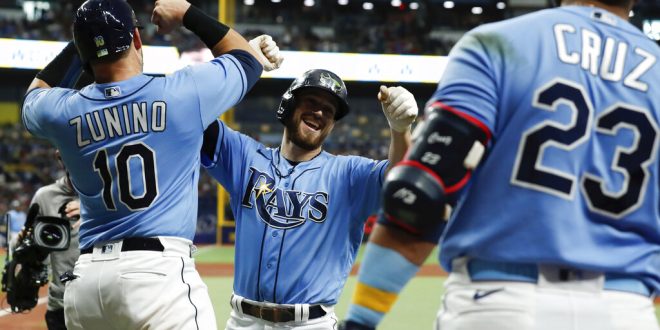 With a 9-1 record in their last 10 games, it’s easy to see why the Rays hold a 7-game lead on the AL East. The Rays have won 8 straight games and 12 of the last 13 games. No other team comes close to that figure. The Rays currently hold the best record in the American League and 2nd best in all of baseball.

Luis Patiño started the season between the minors and majors but solidified himself as an integral part of the rotation. The 21-year-old right-hander struck out 5 over 5 2/3 innings at Tropicana Field last night. This is the first time that Patiño won two consecutive games that he started in his young career.

Brandon Lowe now has 31 career homers off of first pitches. He added two hits with two RBI’s and two walks to help secure the 6-1 victory over the Boston Red Sox.

Boston Struggles on and off the Diamond

From Boston’s perspective, it seems as it couldn’t have gone any worse. The COVID-19 list reached four players: Martín Pérez, Matt Barnes, Kiké Hernández, and Christian Arroyo. On the field, Nick Pivetta gave up four runs on six hits in four innings while the bullpen added two more runs on the night.

Ethan Sanabria is a second-year telecommunications student on the digital film and television production track at the University of Florida's College of Journalism and Communications. He has previously worked as a broadcaster for the Florida Flight basketball team and currently helps the production of WUFT news facebook lives. You can reach Ethan on any of his social media or at Ethansanabria@ufl.edu.
@ethansanabria
Previous Coach Dan Mullen Talks First Game, New Transfer
Next Gators Defensive Coordinator Todd Grantham Talks Depth, Home Opener v. FAU