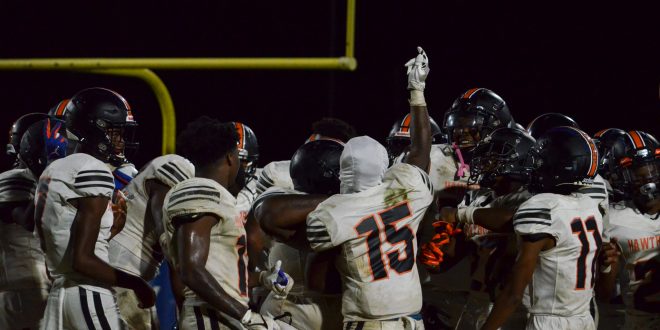 Hawthorne Improves to 2-0, Takes Down P.K. Yonge in Impressive Fashion.

You could just feel the confidence oozing out of both teams going into this Friday night showdown. Players and fans alike exuded more than enough confidence to fill up P.K. Yonge’s home field with cheers you could hear from a mile away. Coach Ingram’s Hornets and Doelling’s Blue Wave, respectively, both started the season off right with wins, and neither were looking for or expecting a different outcome this week. However, unfortunately for Coach Kevin Doelling and his P.K. Yonge Blue Wave, the Hawthorne Hornets simply refused to leave that field without a win.

The first quarter of this matchup was a slugfest, plain and simple. Neither offense was able to get into any type of rhythm, as the run game on both sides was essentially put to a halt by the opposing defense. A few nice runs from P.K. Yonge’s senior quarterback Aaron Small Jr were not enough to make anything happen in the first quarter.

Where the game really picked up was with 6:22 left in the first half, when senior QB Chaz Mackey put Hawthorne on the board with a 30-yard rushing TD. This impressive play put Mackey’s full arsenal outside of the pocket on display. Multiple jukes, spins, and pure speed with the ball by Mackey and his quick feet gave his Hornets a 6-0 lead. This lead would become eight, following a two-point conversion, and would carry them into the half.

Right out of the gate in the second half, Hawthorne fumbles and the Blue Wave recover. This is it. This is P.K. Yonge’s chance to get right back into the game. The Hornets handed it right over to them. Here, though, actually ends up being where the game takes a turn for the worst for P.K. Yonge, a turn in which there would be no way back. In Hawthorne’s red zone, the play after a recovered fumble that put them in this ideal situation, the Blue Wave fumble and hand not just the football, but the game right back over to their foe.

The final score ended up at 24-0 Hawthorne, courtesy of a 4-yard rushing TD by their transfer junior QB Tyler Jefferson, which made it 16-0 with the two-point conversion, and a fourth-quarter gut punch by Junior RB Brian James, which aided the following two-point conversion in creating the final 24-0 score.

Despite an impressive night from QB Aaron Small Jr., who made more eye-popping throws on the run than I can count on my fingers, that Hornets defense and great quarterback play of their own was simply to much for him and his Blue Wave to handle.

Hawthorne looks to improve to 3-0 next week versus Suwannee, as P.K. Yonge looks to bounce back versus Newberry.